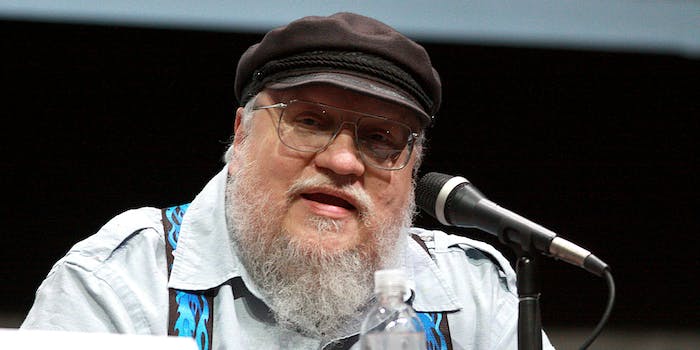 George R.R. Martin appears to confirm ‘Fire and Blood’ will come out before ‘Winds of Winter’

He answered a question on a post involving the Hugo nominations.

Updates on The Winds of Winter, the next book in George R.R. Martin’s A Song of Ice and Fire series, are hard to come by, even as Game of Thrones will end Martin’s story before Martin can. But fans will likely have to wait even longer as Martin appeared to confirm that one of his side books will be published before The Winds of Winter.

The latest insight from Martin arrived (as they often appear) in the comments section of his LiveJournal. Martin highlighted his only eligible title, “The Sons of the Dragon,” which appears in The Book of Swords and delves into some of the Targaryen history he has written, and because Martin tagged the post with “fire & blood,” one fan asked him about the progress and what it meant for the timeline of The Winds of Winter.

Martin’s comment isn’t entirely unexpected. He first announced that he planned to publish the first of two volumes of Fire and Blood in a July 2017 blog post, noting that the book had already been “largely written” and that it would come out “in late 2018 or early 2019.” At the time, Martin added that “I do think you will have a Westeros book from me in 2018” but wasn’t yet sure if it would be his fictional history book or The Winds of Winter. Right now, it appears to be the former.

There has always been an entitlement issue among some parts of ASOIAF fandom, sparking Neil Gaiman to famously state that “George R.R. Martin is not your bitch” back in 2009. But for some fans who try not putting unrealistic expectations on Martin, the reveal that Martin will publish Fire and Blood before The Winds of Winter makes it even more frustrating.

Martin’s most recent book in ASOIAF, A Dance With Dragons, came out in 2011 just after Game of Thrones’ first season. In that time—six-and-a-half years and counting—we’ve only had preview chapters of The Winds of Winter published or read aloud. Meanwhile, Game of Thrones made it all the way to season 7, with just one season left before the show’s finale.

Martin’s last major update on his progress arrived at the beginning of 2016 as Martin expressed his frustration at not being able to finish The Winds of Winter before the arrival of Game of Thrones season 6. The books he had been working on for more than 20 years would not reveal crucial parts of the story; Game of Thrones would get there first. And he mostly blamed himself for it.

“Unfortunately, the writing did not go as fast or as well as I would have liked,” he said in that post. “You can blame my travels or my blog posts or the distractions of other projects and the Cocteau and whatever, but maybe all that had an impact… you can blame my age, and maybe that had an impact too…but if truth be told, sometimes the writing goes well and sometimes it doesn’t, and that was true for me even when I was in my 20s. And as spring turned to summer, I was having more bad days than good ones.”

Martin’s loyal LiveJournal followers might know better than to ask him about The Winds of Winter on his heavily moderated posts, but that doesn’t stop some fans asking or complaining about the book on social media. Even if the topic is as far off from ASOIAF and Game of Thrones (and even with more sensitive posts), there is a chance that someone will either ask or complain that Martin is doing something other than finishing The Winds of Winter.

When the cows come home… pic.twitter.com/lxhgeq6ijK

We had a MAD HAT CONTEST @CocteauCinema, and some of the entries were just wonderful. You can pick up a copy of MAD HATTERS AND MARCH HARES, signed by editor Ellen Datlow and writers Stephen Graham Jones, Matthew Kressel, Katherine Vaz, and Kris Dikeman from JCC bookstore :D pic.twitter.com/BkBxh9Ieqv

My minions gave me a new baby tortoise to keep Morla company. Ladies and gentlemen, I give you Miss Morla's new baby brother, GAMERA! pic.twitter.com/6map2ObEoh

The pressure for him to finish this book is probably immeasurable—and it’s not even the final book in the ASOIAF series. He’s the person who created the story behind the world’s most popular TV show, and no matter what he does or doesn’t say his words are immediately picked apart and scrutinized. (Remember the 12 Days of Westeros promotion his publishers ran on his Twitter a few years ago?)

Saying nothing can lead some fans to suspect he’s not working on The Winds of Winter at all. He’s attacked for having his name attached to other projects. He’s criticized for the events he travels to, even after cutting his schedule, because Martin writes his books at home. He’s criticized when he blogs about something other than ASOIAF. The same goes for when he reveals that a project that was already mostly written—much of Fire and Blood’s first volume comes from material cut from The World of Ice and Fire—because he worked on something that wasn’t The Winds of Winter. He understands the frustration that’s been bubbling, but he is also allowed to work on other stuff.

And that doesn’t even begin to cover how much pressure is on this book when it finally does arrive. It’s already stacked against nearly seven years of theories and speculation following A Dance With Dragons.

Right now, we have no idea when The Winds of Winter will come out. Maybe, as Martin noted last July, we could possibly have two Westeros books this year (or next, depending on when Fire and Blood’s first volume is released). Maybe we’ll see the end of Game of Thrones first before we get to read another page of ASOIAF, as some have feared for years. Maybe we’ll never get to read The Winds of Winter apart from what’s already been published, which some fans also fear. But we are getting at least one book from Martin, one that could provide more insight into the series we’re still anticipating. After all, if Daenerys Targaryen is following in Aegon the Conqueror’s footsteps in ASOIAF like she does in Game of Thrones, it might be worthwhile seeing his path.