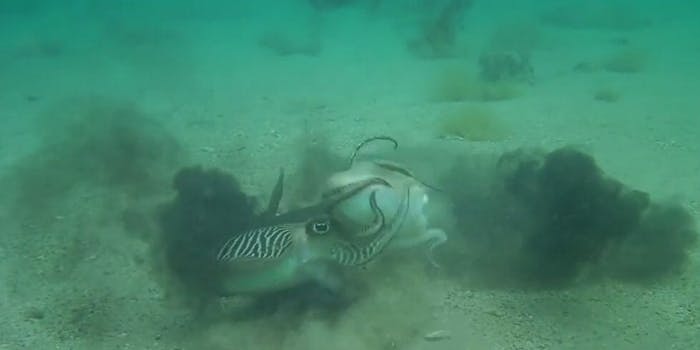 All's fair in love ... and cuttlefish.

Cuttlefish are some of the smartest organisms in the sea. The cousin of the octopus and the squid apparently is a solid mathematician, and the cuttlefish’s adaptability and ability to change camouflage on the fly is amazing.

And if you get too close to a mate, they’re going to fight you with an intensity rarely seen in nature.

That’s what happens in the video below. It was shot by Brown University researchers in 2011 and recently released. As the YouTube description explains, “Male cuttlefish compete for females with a repertoire of visually dramatic behaviors. … While scuba diving in Turkey, we fortuitously filmed an intense sequence of consort/intruder behaviors in which the consort lost then regained his female mate from the intruder. These agonistic bouts escalated in stages, leading to fast dramatic expression of the elaborate Intense Zebra Display and culminating in biting and inking as the intruder male attempted a forced copulation of the female.”

In other words, they’re trying to beat the shit out of each other.

As National Geographic notes, this is the first footage seen of two cuttlefish engaging in a “violent mating battle.” In fact, the intensity of the fisticuffs surprised researchers.

“Cuttlefish do not have an external shell, like most mollusks, so their bodies are really vulnerable,” Brown University’s Justine Allen told National Geographic. “They typically fight with posturing and intimidating skin displays. But in this case, it escalated to physical violence.”

And luckily for the first male, his fighting skills and his never-say-quit attitude won him back the affections of the female he desired along.