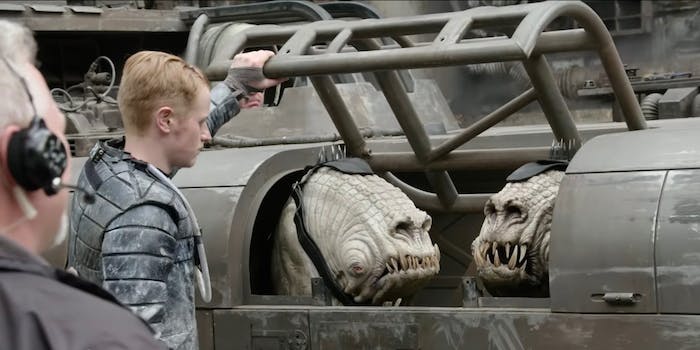 The ‘Game of Thrones’ cameo you completely missed in ‘Solo’

We're not talking about Emilia Clarke.

The Star Wars connection is strong in Westeros, as Game of Thrones actors and showrunners alike have made the jump to hyperspace. But one crossover between the two iconic favorites has been under our noses the entire time.

The first link is apparent. Emilia Clarke, who stars as Daenerys Targaryen on Game of Thrones and the femme fatale Qi’ra in Solo: A Star Wars Story, is front and center in trailers, promotion, and the film itself as one of the film’s leads. The other, as revealed in the latest episode of The Star Wars Show, is far less obvious: One of the Corellian hounds that chase Han Solo and Qi’ra as they try to escape Corellia was played by a Game of Thrones direwolf—specifically Saxon, the dog that played Arya Stark’s direwolf Nymeria.

No, you didn’t miss any actual dogs running through the streets of Corellia. Saxon and another dog wore suits that made them look like the kind of creatures that would hunt and capture two runaways trying to get off a crime-ridden planet.

Lucasfilm used a similar technique when trying to capture movement from vulptices, the crystalline foxes that led the Resistance to safety in The Last Jedi, but the main difference between the two is the result. Lucasfilm ultimately opted for CGI in creating the vulptex performance while the Corellian hounds were real. Their exterior may say otherwise, but maybe they are really good hounds.