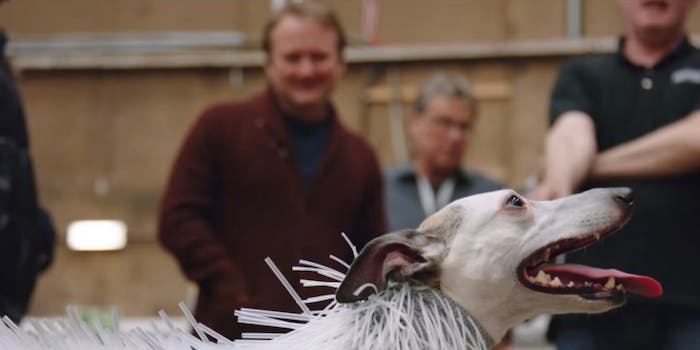 It's just as cute as you imagined.

The Last Jedi’s porgs were famously based on puffins that the film crew encountered while on location in Ireland, but they’re not the only creatures with a cute origin story. Now we finally get to see vulptices in action.

We first learned about the vulptices—the crystalline foxes on Crait who aided the Resistance at the end of the movie (or as Finn called them, “crystal critters”)—back in November. That’s when Lucasfilm released a behind-the-scenes look at what went into creating them. Some of the footage we saw was CGI, but the Star Wars creature shop also used puppetry, animatronics, and a rather creative way of capturing how a vulptex might move.

“We had a little dog come in and we built a little suit for it, and we covered that suit with clear drinking straws,” Star Wars creature shop head Neal Scanlan told Entertainment Weekly. “It was amazing to see him run around. It could run and jump, and it had this wonderful sort of movement to it. It had a great sound to it, as well, because all the little straws moved and flexed with the animal.”

Now that The Last Jedi is available digitally, Lucasfilm released a clip from one of the film’s more than two hours of special features on the creation of the vulptex. Some of the information is familiar if you watched the original clip from November, but now we have footage of what a dog in a suit covered in straws looks like—and it’s just as glorious as we imagined. Especially once the dog dons the vulptex’s pointy ears.

Whether the dog is running around, standing still, or hopping, we can definitely see the connection between this dog and the movements the vulptex ended up making. And just look at it go!

What a good crystal fox.