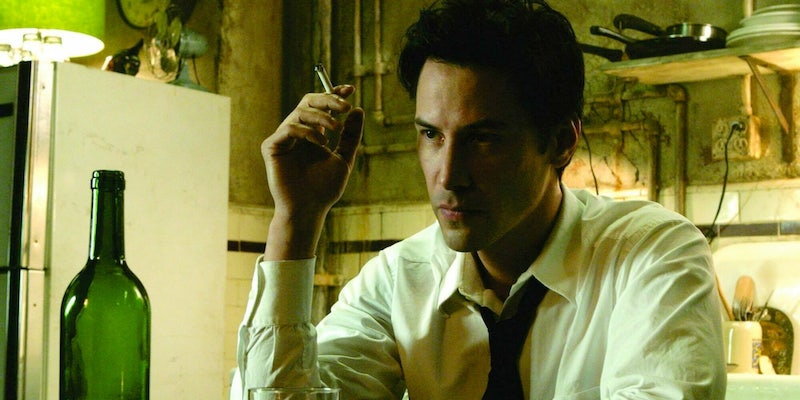 ‘Constantine’ is an underrated gem—and it’s now on Netflix

A bad 'Hellblazer' adaptation? Sure. But it's great as a standalone movie.

The 2005 Keanu Reeves movie Constantine just arrived on Netflix, and here’s the deal: it rules.

Back when it first came out, Constantine was not well-received. The reviews were grudgingly acceptable at best, and the response from comics fans was abysmal. Adapted from DC/Vertigo’s cult Hellblazer series about an occult detective, it bears little resemblance to the source material. Keanu Reeves’ John Constantine is still a cynical detective who battles supernatural enemies, but aside from his smoking habit, the similarities end there.

Instead of being a blond, working-class Englishman, John Constantine is a dark-haired American. Instead of being a disaster-prone con artist, he’s an action hero with a tragic backstory. Instead of telling a downbeat story with subversive political themes, the movie is an action flick with Biblical worldbuilding. Basically, it’s sacrilege to the comics. Yet as a die-hard fan who hated the Constantine TV series for its milquetoast attempt at authenticity, I’ve come to accept two conflicting truths:

Think about it. How many dumb blockbusters include a cast as brilliant as Keanu Reeves, Rachel Weisz, and Tilda Swinton? In fact, I’d count Constantine among Swinton’s definitive works. Amid the typical fantasy/horror tropes of demonic possession and grungy supernatural dive bars, Constantine hit upon a stroke of genius by casting Tilda Swinton as the angel Gabriel.

Introduced in an immaculate suit with gigantic wings, “menacing yet beautiful androgynous angel” is the quintessential Swinton role. Gabriel is a perfect blend of casting and costume design; just one of many visually arresting details that elevate Constantine‘s script from being a feature-length episode of Supernatural.

And then, of course, there’s Keanu. If you’re a Keanu hater (or merely a Keanu doubter), this movie obviously isn’t for you. Otherwise, I’d argue that Keanu Reeves holds this whole movie together. As the original John Constantine—a grumpy British punk—Keanu would be an appalling choice. As the movie’s bastardized American version, his inherent Keanu-ness actually saves the character from being a formulaic noir antihero.

Like Will Smith or the Rock, Keanu Reeves’ star power functions independently from the quality of whatever script he’s working with. Swap him for another mid-2000s action star, and Constantine becomes unmemorable. It’s Keanu’s offbeat humor and subtle sensitivity that prevent John Constantine from becoming an angsty, chain-smoking, grimly macho cliché.

This isn’t to say that Constantine is a secret masterpiece, but it’s certainly underrated. With an excellent cast and a stylish aesthetic, it’s well worth checking out on Netflix, especially if you’re one of the Hellblazer purists who dismissed it back in the day.