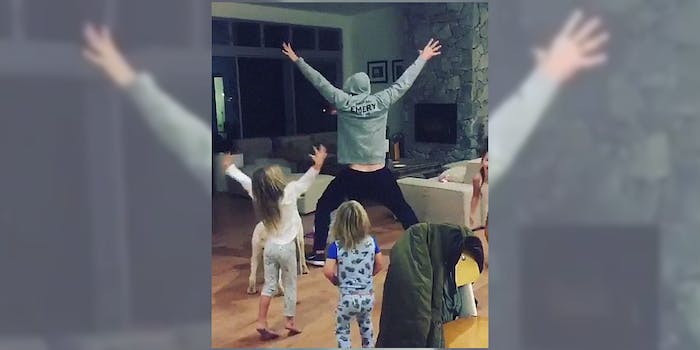 Even the family dog got in on it.

Chris Hemsworth tweeted on Wednesday a preview of some of those moves as he and his three children rocked out to Miley Cyrus’ “Wrecking Ball.”

Although it’s been a few years since the height of the song’s popularity (and meme-ability), it’s easy to see just why it made such huge waves when utter enthusiasm meets the family’s excitable dog. And as Hemsworth’s tagging shows, there’s a family connection as well; his younger brother Liam is dating Cyrus.

What started as a ground breaking music video ended in a savage attack by a cowardly K9. Never work with Kids or Animals. #wreckingball #wreckingdog #daddydaycare #murderonthedancefloor @mileycyrus @liamhemsworth pic.twitter.com/1xuNLd3xdQ

He even got the ultimate approval from Cyrus herself.

Back to those dance moves. Is this how the Avengers stop Thanos? After all, it worked for the Guardians of the Galaxy.