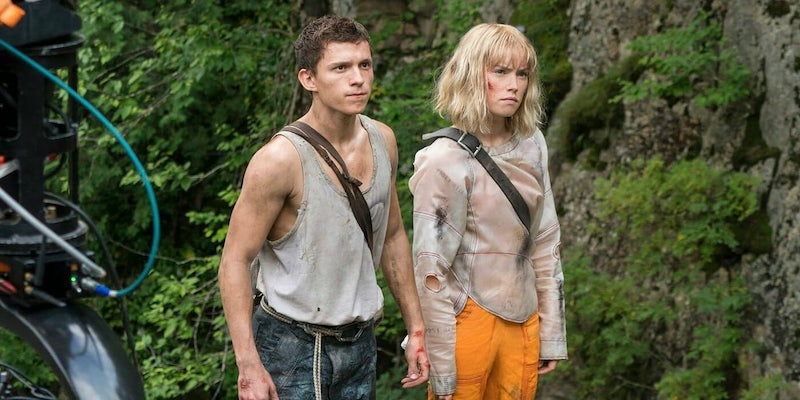 The film has been delayed for extensive reshoots.

Starring Daisy Ridley and Tom Holland, with a supporting cast including Mads Mikkelsen and David Oyelowo, the YA adaptation Chaos Walking was all set to be the next Hunger Games. But this week, Indiewire published a worrying update. Not only is the film delayed, but the original cut is so bad that Lionsgate deemed it “unreleasable.” Extensive reshoots are now underway, explaining why Holland wasn’t at the Avengers: Endgame premiere on Monday.

Written by Patrick Ness, the acclaimed Chaos Walking trilogy is about a boy and a girl (aged up to young adults for the movie) trying to survive on an alien planet recently colonized by humans. The planet is habitable, with one bizarre setback in the form of a virus that (supposedly) killed every woman and turned the men into telepaths.

With men forced to listen to each other’s thoughts at all times, the books explore how people suffer from—and learn to weaponize—this strange affliction. Mikkelsen plays an abusive leader who uses his thoughts to manipulate others, and toxic masculinity is a central theme.

You can see how this idea might be hard to adapt to a commercial YA action movie. However, Indiewire points out that director Doug Liman also struggled to complete previous films while clashing with studio bosses. He wound up being fired from the Bourne Identity franchise despite the first film’s commercial success, and Edge of Tomorrow started filming before the ending had even been written. Chaos Walking has six credited writers, something that suggests an unusual number of rewrites.

Chaos Walking cost $100 million and wrapped filming in November 2017, intended for a March 2019 release date. However, Lionsgate execs were so unhappy with the original cut that they demanded reshoots. This proved difficult to arrange since Ridley and Holland have central roles in Hollywood’s two biggest franchises. Reshoots are now in full swing, with Liman and Holland posting Instagram photos from the set.

Lionsgate’s CEO told the Wall Street Journal, “We wouldn’t be shooting more if we didn’t think we could make this movie work.” Chaos Walking is now set for a 2020 release.