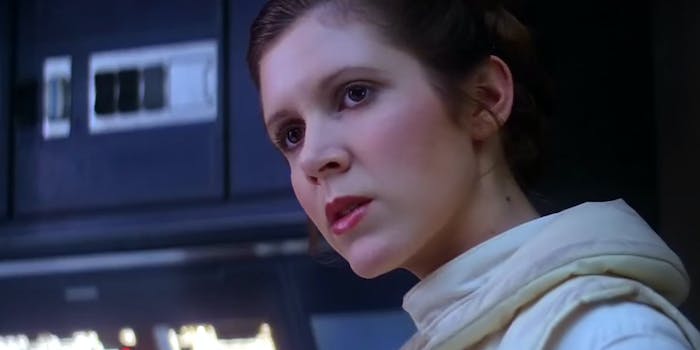 No, Carrie Fisher didn’t rewrite this page of ‘Empire Strikes Back’

She may not have touched this viral page, but she has put her spin on it and countless other films for the better.

Fans and colleagues are in mourning after learning of Carrie Fisher’s death Tuesday, and while she’ll always be beloved for her role as Leia Organa in the Star Wars saga, her work as a famous script doctor is being highlighted to show just how influential she’s been in cinema. But did she doctor one of her biggest films?

Over the weekend, documentarian Will McCrabb posted a page of the script from Empire Strikes Back covered with handwritten notes suggesting different ways to improve the dialogue in the scene where Han suggests they go to his friend Lando Calrissian.

The story spread as fans continued to hope Fisher would make a full recovery in the hospital and was meant to display one of Fisher’s many talents. And while Fisher herself certainly helped make Empire Strikes Back a better movie just by being in it, did she help improve the script?

Well, yes and no.

The script page in question does exist. It’s featured in the book The Making of Empire Strikes Back, but as writer Amy Ratcliffe reveals, Fisher isn’t credited with any of the script doctoring on the page. ComicBook.com, after running an article about how Fisher helped doctor this particular page, updated it with a correction stating that the notes were written by Empire Strikes Back director Irvin Kershner, not Fisher.

The page is from the Making of Empire Strikes Back but the caption doesn't say anything about Fisher: pic.twitter.com/KvilO1Jzhm

But, as reporters wrote about Fisher’s work as a script doctor in Hollywood in recent years, it appeared that Fisher may have had some influence on her own dialogue.

“Harrison Ford was rewriting his stuff in all the Star Wars movies and it became annoying because it impacted my stuff,” she told the Phoenix New Times in 2008. “It is easier as an actor to go into rewriting because you know what would fit into your mouth dialogue wise. We would tell George Lucas, ‘You can type this shit but you can’t say it.’ By [Return of the Jedi], I was rewriting a little bit of my dialogue. George asked me to punch up one of the prequels.”

She may not have touched that one particularly viral script page, but she has put her spin on it and countless other films for the better.