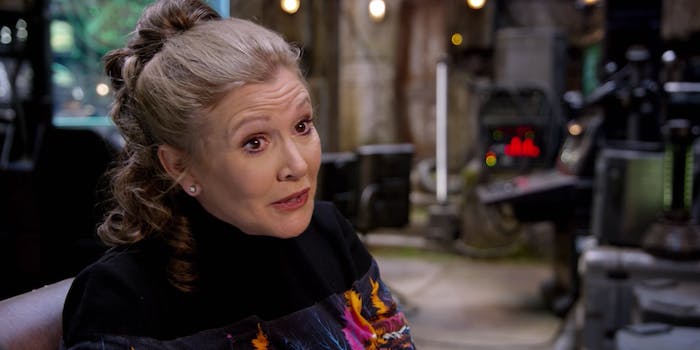 Carrie Fisher will not appear in ‘Star Wars: Episode IX’ after all

'Episode VIII' will be the final film for Princess Leia.

According to Lucasfilm president Kathleen Kennedy, Carrie Fisher will not appear in Star Wars: Episode IX, despite a previous suggestion from the late actor’s brother that she’d make a posthumous appearance in the epic space opera’s ninth chapter.

The news is being met with either sadness or relief, depending on who’s being asked. Some longtime fans felt it would be inappropriate to attempt to include Fisher’s Princess Leia in the film after her sudden and tragic death late last year, while others hoped that she would make a return. Initially, her brother Todd told reporters that the family had signed off on allowing her image to be used in the ninth Star Wars film.

But, to hear Kennedy tell it, that’s not happening. Fisher will indeed appear in Episode VIII, as she’d completed filming all her scenes prior to her death. But she supposedly won’t be in the third film of the most-recent trilogy, which is scheduled to be released in 2019.

Kennedy confirmed as much during an appearance on ABC’s Good Morning America, saying that Fisher’s brother Todd was “probably confused” when he claimed Carrie would be appearing in Episode IX. Said Kennedy:

We finished everything in XIII, and Carrie is absolutely phenomenal in the movie. And we’re so happy that we were able to complete shooting in the summer. Unfortunately, Carrie passed away, so by the time we were well underway with Episode IX in our thoughts, we had not written the script yet. But we regrouped, we started over again in January. So, sadly, Carrie will not be in IX.

Fisher died Dec. 27, days after suffering a major heart attack while flying from London to Los Angeles. Her death sparked a massive outpouring of adoring remembrances, both directed at her and her mother Debbie Reynolds, who died just one day after her daughter. A computer-generated likeness of a young Princess Leia briefly appeared in 2016’s Rogue One: A Star Wars Story, which premiered just 10 days prior to Fisher’s death.