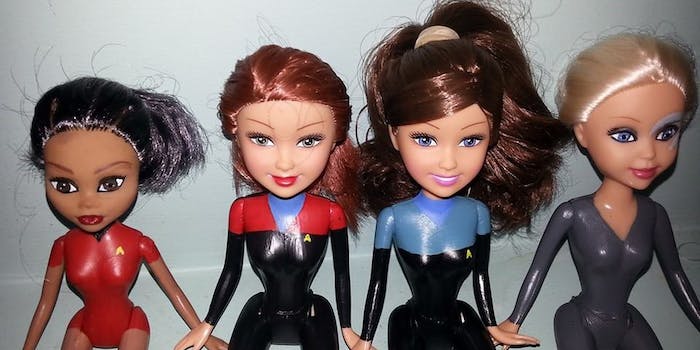 When this mom couldn't find a Black Widow doll for her daughter, she made one herself.

When Rebecca Millar’s daughter asked her for a Black Widow doll, Millar was faced with a problem familiar to many other parents over the years—companies not selling a lot of merchandise geared toward female fans. Millar’s daughter is an Avengers fan, but with no doll available in stores and only expensive options online Millar had to take matters into her own hands.

The Australian blogger recounts on her blog how she gave a doll a makeover, transformed her into Black Widow for her daughter, and heard from many people after sharing the doll online with the hashtag #GirlsLikeMarvelToo. Now it looks like she’s continuing her effort to make a difference by giving more dolls incredible makeovers through Geek Grrls Dolls.

Millar has changed dolls into characters from Marvel like Gamora from Guardians Of the Galaxy, characters from DC like Batwoman, and numerous characters from Star Trek such as Captain Janeway, Seven of Nine, Lieutenant Uhura, and more. Each of the dolls looks amazing and would be perfect for girls or boys who love these franchises.

Harley Quinn doll (hair is still drying, but you get the idea). #HarleyQuinn pic.twitter.com/VUzPh7hWXW

Millar is apparently selling some of the dolls, but is also encouraging people to make their own and is sharing tutorials on her website to help anyone interested in giving it a try. Efforts like Millar’s will hopefully send a clear message to everyone that girls indeed do like Marvel and Star Trek and so many of the franchises typically considered for boys too.