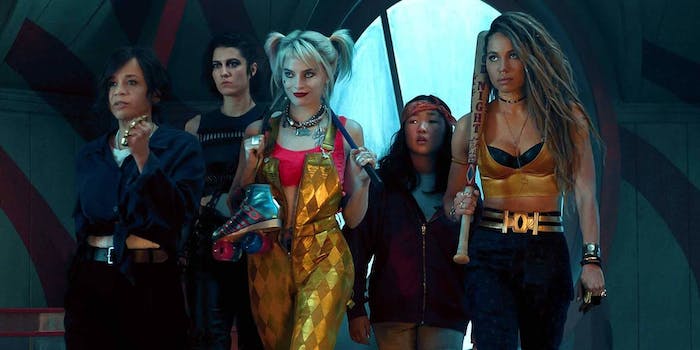 At long last, women are in charge of Hollywood's biggest franchises.

After years of Hollywood excluding female directors from big-budget filmmaking, their time has come. In 2020, all four superhero movies from Marvel and DC will be directed by women, two of whom are women of color.

First, we have Birds of Prey in February, directed by Cathy Yan and written by Christina Hodson, featuring Margot Robbie’s Harley Quinn leading a team of female antiheroes. Then it’s the long-awaited Black Widow film in May, directed by Cate Shortland and co-written by Jac Schaeffer and Ned Benson. Wonder Woman 1984 arrives in June, directed by Patty Jenkins, who co-wrote the script with Geoff Johns and David Callaham. Then in November, we get Marvel’s intriguingly weird-looking (and star-studded) new franchise The Eternals, directed by Chloé Zhao and written by Matthew and Rian Firpo.

What we’re seeing here is the culmination of a long and drawn-out struggle for women to be “trusted” with big-budget properties, even while relatively inexperienced men repeatedly got hired for these jobs with mixed results. Hollywood still has a long, long way to go before it reaches gender parity behind the camera, but 2020 really does feel like a watershed moment. Marvel and DC have been male-dominated creative environments since their inception, and until now we’ve only had a taste of what these franchises might look like with women at the helm. And crucially, with four movies coming out in the same year, there’s less pressure for them to individually prove a point about women filmmakers or the dreaded “strong female characters.”

These four directors represent a pretty wide range of perspectives already. Patty Jenkins is the most seasoned Hollywood insider, an experienced American filmmaker who achieved worldwide fame with Wonder Woman and previously directed Charlize Theron to her Oscar win for Monster in 2003. Born in China and raised in Hong Kong and the U.S., Cathy Yan earned praise for her feature-length debut Dead Pigs, a Chinese comedy-drama that boasts a 100% rating on Rotten Tomatoes, but isn’t really known to U.S. audiences. She was an admittedly unexpected choice for Birds of Prey, whereas Chloé Zhao and Cate Shortland followed a more familiar career trajectory for indie filmmakers getting snapped up for franchise projects. Zhao wrote and directed two well-reviewed indie dramas, best known for her 2017 Western The Rider. Meanwhile, the Australian Cate Shortland has directed three films and a fair amount of TV, her 2017 thriller Berlin Syndrome being the most obvious connection to Black Widow’s source material.

Wonder Woman is the most straightforward superhero movie of the bunch, with Black Widow framed as an espionage thriller, Birds of Prey as a stylish girl-gang adventure comedy, and The Eternals as a sci-fi/fantasy epic with an ensemble cast. All of them feel fresher than the prospect of another reboot for Batman or The Flash, appealing to different tastes and audiences. And perhaps most importantly, it doesn’t really matter if one of them flops. Following the success of Wonder Woman and Captain Marvel, naysayers can’t rationally argue that women don’t make bank at the box office.