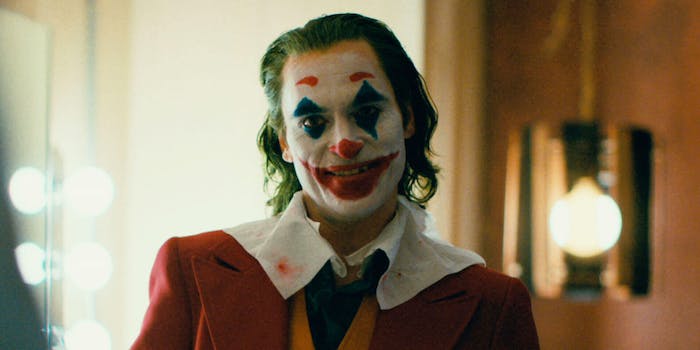 The movie is not even out yet, but people are guessing who will see it in theaters.

Todd Phillips’ Joker hasn’t premiered in theaters nationwide yet, but there’s already a confounding mix of hype and controversy surrounding the film. Some predict it will be a gritty, Oscar-buzzing potential masterpiece with an outstanding performance by lead Joaquin Phoenix. Others are expressing valid concerns about the brand of toxic masculinity portrayed in the film. Particularly, some are worried that men who feel marginalized by society will maybe identify a little too strongly with the film, and a new “Tickets to Joker” meme riffs off of that very idea.

Essentially, the meme boils down to a text format that reads “[X amount] tickets to Joker, please” accompanied by a photo of the type of people you would expect to be first in line on opening night—both real and fictional.

Know Your Meme writes that the meme appears to have originated in early September on 4chan, of all places, when an anonymous user published a post that featured a photograph of Dylan Klebold and Eric Harris, who murdered 12 of their fellow students and one teacher in the Columbine High School massacre in 1999, with the caption, “2 tickets to Joker please.”

From there, the meme began circulating on social media sites such as Twitter and Reddit, as people began using it to roast “Chad” and incel culture, as you can see in some examples of the “Tickets to Joker” memes, below.

“Tickets to Joker” memes aside, people are taking the possible implications of the film very seriously. Warner Brothers was forced to address the concerns of families of the Aurora, Colorado theater mass shooting victims during a screening of The Dark Knight Rises in 2012, who called for the media company to take a stand against gun violence—rather than boycott the film altogether.

Meanwhile, the United States Army sent out an email warning of any potential threats, targeting incels in particular who might attempt to incite violence at Joker screenings. Directed at service members, the email made a general suggestion that moviegoers identify escape routes and “run, hide, fight” in the event of a movie theater massacre.

Sadly, in these times we’re living in, that’s probably just good advice for anyone planning a night out at the movies.