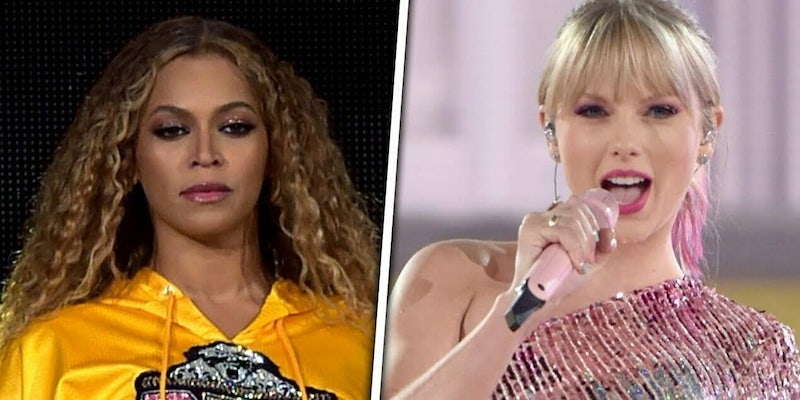 Understanding the outrage behind '#Mayochella.'

The Billboard Music Awards on Wednesday became divisive and personal on Twitter. Taylor Swift’s live performance of “Me!” with Panic! At the Disco’s Brendon Urie faced rampant criticism due to its uncanny parallels to Beyoncé’s iconic 2018 Coachella set.

Although artists like Prince and Gwen Stefani have used drumlines during their shows in the past, and Swift has worn marching band uniforms onstage, this was different: the whistle-blowing intro, entrance pose, lighting, risers, and how it was filmed all looked familiar. Even Beyoncé’s art director chimed in with a dejected emoji.

Swift’s show-opening number took nerve—especially because we’ve recently been marveling at Bey on Netflix and Spotify.

Homecoming: A Film By Beyoncé, the streaming documentary that was released last month, captured the makings of her larger-than-life festival performance and proved to be as grandiose and intricate as the megastar herself. The fervor it ignited became even more dynamic when Beyoncé released an accompanying live album.

Her domination of Coachella was about putting Black culture front and center in a setting where it is historically plagiarized and then discarded. From the full marching band to the majorette dancers to the step show, Beyoncé’s set was unapologetically steeped in Black Greek life.

“I’ve always dreamed of going to a HBCU,” she confessed in the beginning of the film of her fondness for historically Black colleges and universities. “When I decided to do Coachella, instead of pulling out my flower crown… it was more important that I brought our culture to Coachella.”

In order to execute a performance that adheres to her sky-high standards, she did what Black women do: She put her head down and did the work despite its grueling nature.

Perhaps that is why online, Swift’s performance was met with shock, anger, and hurt. What took the very first Black woman to headline Coachella nearly a year to visualize and execute took a sub-par white pop singer five minutes to shamelessly copy.

At the Billboard Music Awards, Swift wasn’t paying homage to Beyoncé’s creativity, sacrifice, or hard-work—she seemed to be appropriating it. It understandably upset people of color on the internet. Twitter users called it “Mayochella,” and it started a social media feud between fandoms who posted side-by-side comparisons.

From the intro whistle to the sound effects to the entrance, I can't. #mayochella pic.twitter.com/05p9SFmka2

Swift later shared on Twitter that she was also releasing live rehearsal audio on vinyl and CD from the performance, which followed in the same vein as Beyoncé’s live record.

Whether Swift purposefully borrowed ideas from Beyoncé or not, white privilege is a constant problem in entertainment. It’s what allows artists like Ariana Grande and Justin Bieber to oscillate between the genres of pop and R&B and take slang, sounds, and dance moves from R&B into the more lucrative pop space. When whiteness is considered the default for humanity, you are given more platforms to share your work.

It’s what keeps Swift insulated from accountability: She’s publicly ignored the social media backlash from the Billboard Music Awards and her career will remain unscathed—just as it did in 2017 when the “Look What You Made Me Do” video was criticized for its similarities to Bey’s “Formation.” (Swift’s director denied taking inspiration from Beyoncé.)

Beyoncé’s discipline, drive, and an endless quest for both innovation and excellence may seem excessive to some, but Beyoncé—like most Black women—knows that we are rarely given chances like these to shine.

“It’s hard to believe that after all these years, I was the first African-American woman to headline Coachella,” she remarked in Homecoming. “As a Black woman, I used to feel like the world wanted me to stay in my little box. And Black women often feel underestimated. It was important to me that everyone that had never seen themselves represented felt like they were onstage with us.”

Having over 200 people onstage to make Beyonce’s vision a reality required eight months of nonstop rehearsing even though it overlapped with preparation for her On the Run II tour with hubby Jay-Z just two months later. She acknowledged the extreme lengths it took to pull everything off in the Netflix doc.

Beyoncé also explained that her difficult pregnancy with twins prior to Coachella, which was plagued by high blood pressure, toxemia, pre-eclampsia, and an emergency c-section, served as a catalyst to test the limits of her body. “I had to rebuild my body from cut muscles,” she said. “In order for me to meet my goal, I’m limiting myself to no bread, no carbs, no sugar, no dairy, no meat, no fish, no alcohol… I definitely pushed myself further than I knew I could. I will never, never push myself that far again.”

Beyoncé’s drive for the perfect show is a feeling that Black women know all too well. If we show any sign of imperfection or weakness, we are torn to pieces.

From attempting to scrub unflattering pictures from her 2013 Super Bowl halftime show from the internet to refusing to grant traditional interviews, her level of discernment stems from a world that holds Black women to unrealistic standards of perfection—and tears us apart when we somehow manage to meet them anyway. It’s criticism that Swift’s mediocre song and performance simply haven’t received.

But despite the Swifts of the world, Black women will continue to go above and beyond the obstacles set in place for us so we can show the world how magical we truly are.

Correction: A previous version of this article wrote that Homecoming was Beyoncé’s first live album.

Candace McDuffie is a Boston-based music and pop culture writer. Her work has been featured in publications such as Glamour, Paper, Entertainment Weekly, WBUR, Teen Vogue, DJBooth, Forbes, Marie Claire, Bandcamp, and Vibe, among others.