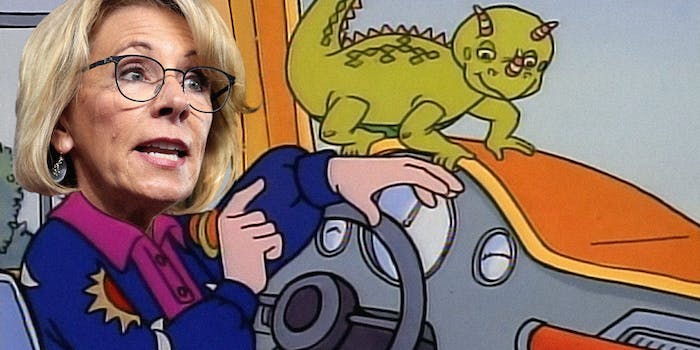 What if Betsy DeVos were Ms. Frizzle? A ‘Magic School Bus’ horror story

This isn't the Ms. Frizzle we all know.

The Frizz is widely regarded as one of pop culture’s most beloved fictional educators. DeVos, on the other hand, has quickly become one of the most despised members of Trump’s cabinet. A billionaire political donor, she was given control over the nation’s public schools despite having zero experience and seemingly little appreciation for public education. Even a member of Congress joined the internet in mocking DeVos and lamenting her costume choice.

Betsy DeVos how dare you besmirch the good name and honor of Ms. Frizzle!!! pic.twitter.com/yN57Vb1DnB

Unlike @BetsyDeVos, Ms. Frizzle supported science in the classroom and actually had a background in education https://t.co/aiMcvuICTC

This being Halloween, we decided to have a little fun and imagine what The Magic School Bus might be like if DeVos were the new Ms. Frizzle.

The fourth grade class at Walkerville Elementary School was ready to take yet another fun and educational trip with beloved teacher, Ms. Frizzle. But today, something was off.  Ms Frizzle hadn’t shown up for class.

In her place was a woman who definitely looked like a Frizzle: She had bright red-orange hair and a space-themed dress. The woman’s name was Betsy Felicidee Frizzle, and she would be taking over the science class for now. Some of the students were receptive to this new Frizzle, but Arnold—always the cautious sort—remained wary.

The students got onto the bus, and Betsy Frizzle waited until they were settled before turning to them. This was her first day in a public school classroom ever, she explained, but there were going to be some changes. Betsy took out a stack of paper from her bag and handed it to the students to pass around.

“What is this?” the class asked.

The thick packet, riddled with misspellings, was a cost breakdown of their trips, which had never been a concern before. Turning toward them, Betsy told them that for far too long Ms. Frizzle’s classroom had traveled on “so-called free money,” and it was about time that “schools and taxpayers should also be treated fairly” by putting some of the costs on the students themselves.

But, the class pointed out to her, the number was astronomical. It seemed to suggest that they should have to cover the costs of fuel and trips over 20 years of educational adventuring with accrued interest, which made little sense given that they were just fourth graders. Though they knew numbers that high existed, the reality of imagining an amount of money with all of those zeroes was nearly unfathomable.

“According to my research,” D.A. said after looking at one page of the thick packet, “we can reduce our impact on the environment by using renewable energy for the bus.” Betsy Frizzle dismissed her claim, calling it fake news.

Another student looked up with a confused expression. Why was this pseudo-Frizz planning to get rid of important bus quirks vital for everyone’s inclusion and protection: the shrinkerscope, the shape-shifting technology, and the systems that allowed them to breathe underwater and in space?

“This is not how Ms. Frizzle does things!” Arnold exclaimed as he attempted to get his phone out to find his missing teacher, except when he attempted this, his phone slowed down to a snail’s pace. A message popped up, stating that his data was capped unless he paid for a higher-tier of service from his cellphone company. He sighed in exasperation—there must be “changes” at the Federal Communications Commission, too.

“Seatbelts, everyone!” Betsy Frizzle shouted before strapping herself in. The students buckled their seatbelts reluctantly.

“I don’t think any of us could have Bet-seen that coming,” Carlos said as the bus began to take off on their next adventure.

“Carlos!” the students shouted, but their response to his pun was more muted than usual.