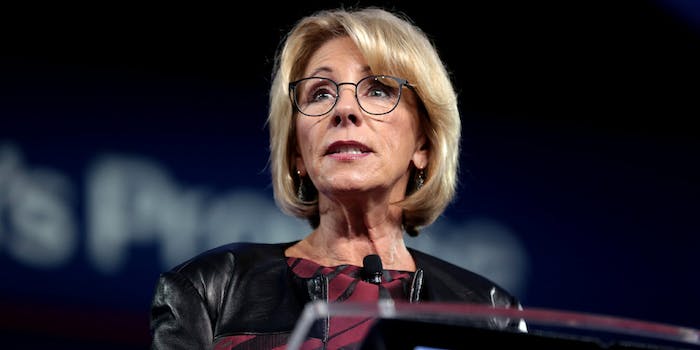 The Education Department says the policies were ineffective.

Education Secretary Betsy DeVos has announced that the Trump administration has rescinded 72 guidance documents that describe the rights of students with disabilities, saying the policies were “outdated, unnecessary, or ineffective.”

The Education Department addressed the decision in a newsletter on Friday but was officially done Oct. 2. The documents—63 of which are from the Office of Special Education Programs and nine from the Rehabilitation Services Administration—include how schools can use federal money for special education, directives on vocational programs and independent living services, and a plain-English translation of legalese so parents of children with disabilities understand their rights under the Individuals with Disabilities Education Act and the Rehabilitation Act.

While the regulations in these documents are still in place, for now, the lack of record and guidance only creates confusion.

“All of these are meant to be very useful … in helping schools and parents understand and fill in with concrete examples the way the law is meant to work when it’s being implemented in various situations,” Lindsay E. Jones, the chief policy and advocacy officer for the National Center for Learning Disabilities, told the Washington Post.

When Trump signed an executive order to rid the federal government of “unnecessary regulatory burdens” in February, the Education Department sought comments for a hearing about how this would affect disabilities guidelines. Jones, along with many disabilities advocates, made her concerns known.

Since then, the Trump administration has also rescinded guidelines for how to treat transgender children in schools as well as the Title IX guidelines for reporting and investigating sexual assault on campus.

“If the documents that are on this list are all covered in newer documents that were released—which sometimes does happen—that would be fine,” said Jones. “Our goal is to make sure that parents and schools and educators understand how these laws work, and the department plays a critical role in that.”