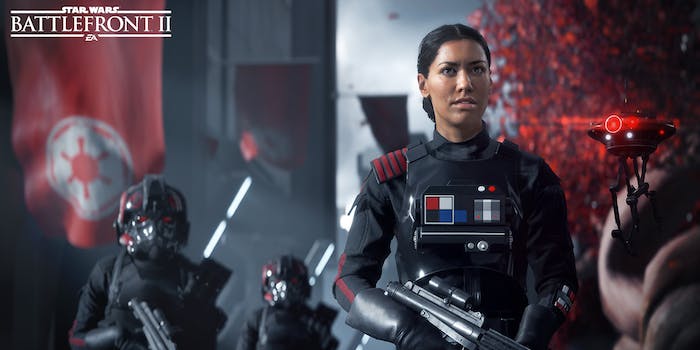 Battlefront II's anti-microtransaction campaign got a little out of hand.

Following backlash from gamers, EA halted in-game purchases in the new Star Wars Battlefront 2 game ahead of its launch late last week. The main objection was that in-game transactions are a money-making scheme that creates an uneven playing field. While some players spend hours earning in-game currency, others just buy those credits with real money.

It’s easy to see why some people hate in-game transactions, and EA surrendered to the protest. “We’ve heard the concerns about potentially giving players unfair advantages,” wrote EA, removing the option to buy in-game loot crates while it considers other options. The controversy should have ended there, but then politics got involved. Battlefront II is now being investigated in Hawaii and Belgium, accused of promoting gambling to children.

Hawaiian Rep. Chris Lee described Battlefront 2 as a “Star Wars-themed online casino, designed to lure kids into spending money.” He said it promotes an “addictive cycle of gambling,” and pushed for legislation to “protect families by prohibiting the sale of games with these gambling mechanisms.” Battlefront II just became the poster child for a public battle against in-game transactions.

This isn’t the first time randomized loot crates have been compared to gambling. Appearing in games like Overwatch, loot crates contain useful items or prizes, and can either be earned or purchased. They’re often designed to resemble the appeal of slot machines, and you don’t know what’s inside until you earn (or pay) for the box. You could argue that loot crates inspire the same addictive rush as gambling.

Until last week, this wasn’t part of the public conversation about Battlefront 2. In fact, gambling was never the main thrust of the backlash against EA. So, how did it wind up having a political impact in the real world? It may be thanks to some overzealous activism from gamers.

The above image was posted by redditor MichaelHawkisbig, shared to the Battlefront subreddit last week. Instead of complaining about microtransactions in the EA game Battlefront 2, it reframes the argument in more accessible language. The problem isn’t unfairness; it’s gambling. The target isn’t EA; it’s Disney’s kid-friendly Star Wars franchise. Using simple hashtags, it gives easy instructions on how to share on social media.

The top two Reddit comments remark that it’s “the sort of half truth” that would easily go viral, and that “Facebook moms would go crazy” over the suggestion that Disney promotes gambling to kids. They were right. On Twitter, the #gambling hashtag is now full of people complaining to Disney about Battlefront 2.

While EA’s statement focused on the argument that microtransactions are unfair, this hashtag campaign may have been a precipitating factor. According to the Wall Street Journal, EA halted in-game purchases after receiving a message from Jimmy Pitaro, Disney’s head of consumer products and interactive media, as a result of the online backlash.

Intentionally or not, Battlefront fans may have kickstarted a mainstream campaign against loot crates.