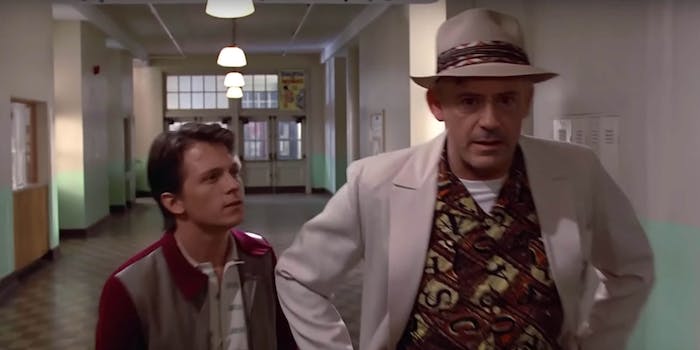 Uncanny ‘Back to the Future’ deepfake transports Tom Holland and Robert Downey, Jr. to 1985

Back to the Future remains one of the few classic film trilogies that has so far resisted being remade or revived by Hollywood, but a new deepfake offers a compelling—if not downright creepy—argument for why it might not be quite a disaster.

Tom Holland and Robert Downey, Jr. practically perfected the dynamic of an overeager teenager and the reluctant mentor figure in the MCU. And thanks to some editing from EZRyderX47, we now know how they’d look in the roles of Marty McFly and Doc Brown during a quintessential exposition scene complete with character catchphrases. This is heavy, alright.

On the surface, it captures one part of the Peter Parker–Tony Stark dynamic we’ve seen on the screen over the past few years.

The Holland deepfake works a little better than Downey, Jr.’s, but the effect is jarring nonetheless: If it’s been a while since you’ve watched Back to the Future, it’s almost scary how well it works. With a little more tweaking on the technology and time, who’s to say that we won’t end up seeing a feature-length deepfake of a beloved film one of these days?