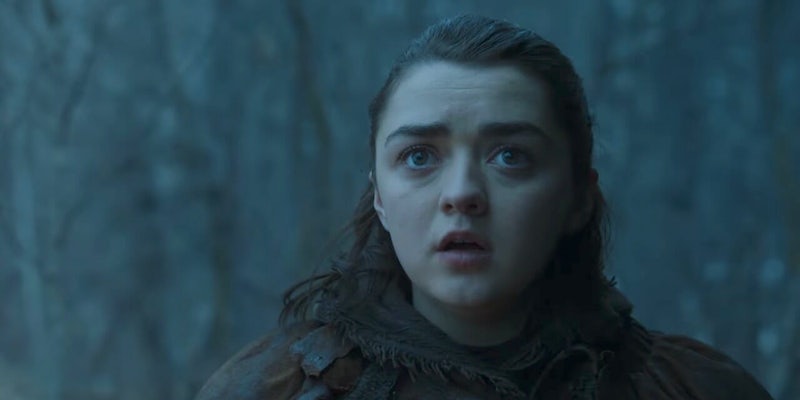 Is this ‘Game of Thrones’ fan favorite coming back on Sunday?

A wolf that hasn't been seen in many years.

Warning: This episode contains spoilers for Game of Thrones’ seventh season and speculation for the upcoming episode, “Stormborn.”

Game of Thrones spent years tearing its characters and ruling families apart—but now we’re finally starting to see some get pulled back together. The next episode, “Stormborn,” offers the possibility that we might see a reunion we’ve been waiting for since season 1.

The preview for “Stormborn” doesn’t show Bran, but we get flashes of Jon, Sansa, and Arya. Two quick shots cut together seem to suggest that after many years apart, Arya will finally come face to face with a wolf—something backed up by set reports. And no, that’s not a clever way of saying it’ll be one of the Starks; she might actually see her own direwolf, named Nymeria after the legendary warrior Queen Nymeria.

Fans have been hoping to see Arya–Nymeria reunion for years. The Stark children were given direwolf pups in the very first episode of Game of Thrones, and while the Stark-direwolf relationships have always been particularly special, they haven’t always been happy. Arya hasn’t seen her direwolf since Game of Thrones’ second episode, “The Kingsroad,” where Nymeria attacked Joffrey Baratheon and Arya sent her free. Arya knew that if Nymeria stuck around she would be killed for harming Joffrey. (After Nymeria ran away, Sansa’s direwolf Lady was killed in her place.)

For the first six seasons, we had four other direwolves to follow and root for. But those numbers have drastically dwindled. Robb’s direwolf Grey Wind died at the Red Wedding. Rickon’s direwolf Shaggydog died off-screen and his head was presented to Ramsay Bolton as proof of Rickon’s identity; the appearance was so sudden and off-putting that some fans theorized it was all a giant ruse. Bran’s direwolf Summer sacrificed himself to save Bran and Meera from the wight and White Walker attack in the episode “The Door.”

Against the odds, Nymeria and Jon’s direwolf Ghost are the only two of the pack left standing. Ghost has always been at Jon’s side—even after Jon’s temporary death. But Nymeria? Her whereabouts have been a mystery in the show. The books give far more hints, not only to the readers but even to Arya herself.

In the books, Nymeria isn’t seen again by Arya or any other characters once she runs away near the Trident in the Riverlands. That doesn’t mean she isn’t pulling off her own bit of conquering in the background.

Through a mix of reports, rumors, and wolf dreams, readers learn that a large, female direwolf—heavily implied to be Nymeria—is leading hundreds of wolves and terrorizing the Riverlands. She and her wolfpack have attacked men who tried to hunt them, killed scouts, eaten a shepherd and his animals. In one report that reached Jaime Lannister, a victim described the lead wolf as “a she-wolf of monstrous size. A direwolf, to hear him tell it.”

All of the Starks are wargs of a sort in the books, not just Bran. Arya’s connection with Nymeria is particularly strong, and Arya is able to enter Nymeria’s mind in her sleep despite being thousands of miles away from her. Arya may even be responsible for some of the terror enacted by Nymeria’s wolfpack.

It was also Arya—as Nymeria—who pulled Catelyn Stark’s body out of the river after the Red Wedding. Soon after, Beric Dondarrion gave up his life to resurrect Catelyn, who’s now consumed by vengeance and known as Lady Stoneheart.

“All these wolves have a strange and deep connection with their Stark counterparts,” showrunner David Benioff explained in a video for the season 6 episode “Home.”

He was referring to Ghost’s connection with Jon at the time, but it probably just as much applies to Arya and Nymeria.

So is the wolf Nymeria?

The assumption that the wolf shown in the “Stormborn” teaser is Nymeria is a safe bet to make. It’s definitely not Ghost, who’s all white and presumably up at Winterfell with Jon, and all of the other Stark direwolves are dead. But would Game of Thrones actually reveal Nymeria so soon?

The lighting isn’t the best in the trailer, which has a blueish tint to it. From a glance, the markings on the wolf don’t align quite with what we last saw with Nymeria, though it’s still possible it could be her. If not, it would be within Game of Thrones’ arsenal to set up a shot of a generic wolf encounter to preface Nymeria’s arrival.

More important is the motivation behind the scene. Arya is hellbent on killing Cersei Lannister in King’s Landing. Despite her drive to avenge the Starks for the Red Wedding, Nymeria’s appearance might point her in a different direction: back home with the rest of her wolfpack.