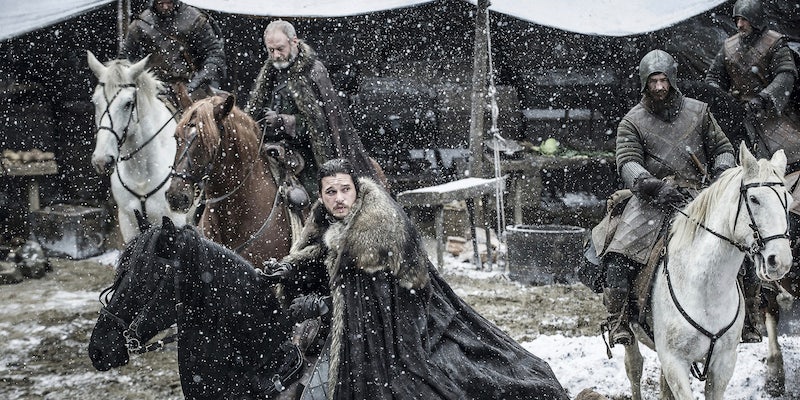 Just-released ‘Game of Thrones’ photos hint at a huge surprise

Hints of what's to come.

Warning: This article contains spoilers and speculation for Game of Thrones’ seventh season.

HBO just released photos for the second episode of Game of Thrones season 7, which hint at even more intrigue and tension to come in the great war—as well as yet another potential reunion in the making.

The photos arrived from Winterfell in the north, Dragonstone in the east, Oldtown in the south, and somewhere in the middle. On the surface, they pin characters together, though these might not always be the friendliest of reunions. Even the most inconspicuous photos could lead to more questions.

Another one of Arya’s companions could show up

We already suspect she might be reunited with her direwolf, Nymeria, next episode, but at some point during the episode, according to these photos, she and her horse will be stop near a door we’ve seen before. Arya might be at the Inn at the Crossroads. It’s been featured in four previous episodes to date, and it’s where the four major roads in Westeros converge. It appeared in the Game of Thrones opening credits for the first time in “Dragonstone,” although it didn’t come to life like other major locations.

If Arya is still heading to King’s Landing, she’ll almost certainly have to stop at the Inn. And who did we last see at the Inn at the Crossroads?

That’s right: Hot Pie. While we’ve been expecting Gendry to show up eventually, Hot Pie may have been hanging out there under the radar.

We haven’t seen the amateur baker since season 4 (and with Arya since season 3), but as far as we know he’s still alive and baking direwolf-shaped bread. If the two do meet again, will it be a happy reunion, or will too much have changed? Will Hot Pie accidentally blow Arya’s cover?

The uneasy alliances at Winterfell

The preview for “Stormborn” featured Lord Yohn Royce vocalizing that they can’t trust the Targaryens, which could happen after Jon receives Sam’s letter about all of the dragonglass at Dragonstone. But based off the promotional photos, it looks like Jon Snow and Davos Seaworth might end up leaving Winterfell, leaving Sansa behind to hold the northern stronghold.

However, that could leave Petyr Baelish, who thrives in chaos, behind to potentially twist Sansa into distrusting further distrusting Jon. Brienne already felt that Baelish was overstaying his welcome, but now things appear to be coming to a head for the King in the North and Littlefinger.

The background of their confrontation suggests that not only are Jon and Baelish in the crypts of Winterfell, they’re right in front of a very important grave: Lyanna Stark, Jon’s mother. How much Littlefinger knows about Lyanna’s death is still up in the air, but if anyone besides of Ned Stark, Bran, and probably Howland Reed know, it’d be Littlefinger.

Daenerys’ homecoming was mostly a silent one, but now that she’s settled into her new home, she’s got the Seven Kingdoms to conquer—and she’s not exactly starting from scratch. Her Small Council includes figures from Casterly Rock, Highgarden, Dorne, and Pyke. What’ll be more interesting is how they plot and clash—and whether they take up Yara’s suggestion that Daenerys should attack now.

Samwell Tarly got a promotion

Maybe? We’ll have to see how Archmaester Embrose (Jim Broadbent) reacts to Sam going into the restricted section of the Citadel’s library, but for now he isn’t on poop duty anymore so it’s a definite step up.

The next episode of Game of Thrones will air Sunday, July 23.