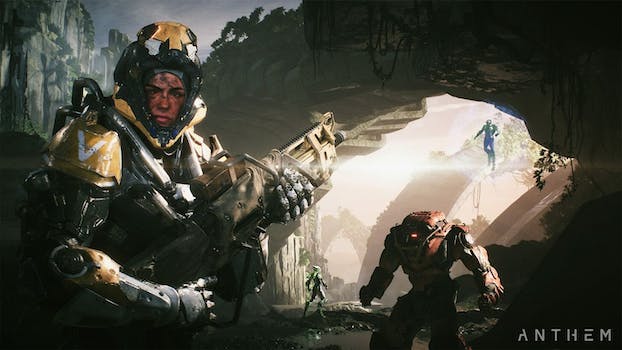 BioWare’s latest experiment doesn’t quite soar, but it shows potential for the future.

The speed at which your character walks around Fort Tarsis tells you everything you need to know about Anthem. When I played the game’s beta earlier this year, it was a sluggish churn to explore the bustling marketplace’s narrow corridors. My avatar crawled through the crowded area at an infuriating pace.

Others had similar issues, and it was announced that players would be able to move faster outside of their mech suit.

And so, one of my biggest concerns about the game was addressed with a hand wave and some patch notes. So it goes with the always-online nature of games in 2019.

But as the official release drew nearer, more problems seemed to surface. BioWare detailed massive changes that were coming under the guise of a “Day One” update that would arrive after certain subscription members had been playing for more than a week. Before the game even hit store shelves, several players had already seen the end credits and detailed their frustrations with the post-game content. Controversies about loading screens ran wild, and debate over a limited trial was splitting the community.

More people had an opinion about Anthem than had actually played Anthem, it seemed.

But what can you expect from the latest game from a developer with a pedigree like BioWare’s? As one of the most prolific and beloved developers in history, each new title will bear the weight of unreasonable expectations. In Anthem, players are searching for characters as strong as Mordin Solus. They will fondly recall their time spent questing with the Grey Wardens. They’re desperate for moments like discovering Darth Revan’s true identity.

This is not a project with the storytelling scope of Mass Effect or Dragon Age. Instead, the focus is on making players work together to explore a new world, build impressive loadouts, and chase alluring loot. Calling Anthem “BioWare’s Destiny” is a better parallel, but not entirely honest. There is a more purposeful narrative structure at work here, as well as more accommodating options for those who want to play solo. The game feels torn between two identities: on one hand, an expansive RPG; on the other, an in-depth online arena.

Anthem’s concept is centered around collaboration and cohabitation, encouraging players to experiment with a variety of powers and weapons. The available selection of Javelins, or high-powered exosuits, each provide plenty of diversity with no clear “right” way to play. When Anthem works, it can be a thrilling superhero fantasy come to life.

When Anthem doesn’t work, it can be a frustrating, obtuse experience. Due to the way the game is built, some issues that plague certain sessions may not even appear in others. Bugs and glitches could derail an entire mission, or you might be able to blast through the entire story in one high-octane sitting. All these various viewpoints are accounted for, laid on top of the same foundation.

Diving into an open world occupied by other living players should open the door for more organic storytelling. I want to be talking about moments spent exploring with friends, taking down massive enemies, and finding hidden secrets. Instead, I’m hung up on terrible matchmaking errors and unfortunate online experiences.

Which is to say, your mileage may vary. BioWare’s latest effort is an ambitious beast. Crowded with dense menus and complicated multiplayer systems, it’s easy to see why Anthem took years to piece together.

Roughly two hours in, the game’s formal structure reveals itself. Players live in Fort Tarsis, an enclosed urban area that protects citizens from the dangerous jungle outside. As a Freelancer, your job is to journey out into the world and watch for potential threats. This leads to contracts and odd jobs assigned from various characters around the city, as well as pressing missions in the main story. But, really, your main motivation will be collecting new equipment to spruce up your mech suits.

For players seeking an intricate, compelling narrative, Anthem makes you work for it. If you’re willing to dig through layers of cortex entries and data logs, there is a well-realized fiction to be found. The fantasy sci-fi elements present in the world of Bastion are intriguing, but passively represented.

Your freelancer is a flat, lifeless solider. Any discernible traits must be imagined by the player. Likewise, to find what makes the world unique, you must read up on the lore on your own volition. If games are meant to tell interactive stories, Anthem only does half the work.

A mystical force known as the Anthem of Creation made this volatile landscape the place it is, and it continues to change, revealing new dangers by the day. The conflict at the core of Anthem’s campaign is over control of Shaper relics—tools used to channel and influence the Anthem of Creation.

While the main antagonist known as The Monitor is barely present, there are some memorable characters in Fort Tarsis’ cast. Owen, your main sidekick, starts as a charming youngster who reveals a deeper purpose midway through the game. Faye and Haluk, allies from your Freelancer’s past, add an interesting wrinkle to the story dynamic. And my favorite character, Sentinel Dex, isn’t introduced until two-thirds of the way to the ending.

Though it takes a while for the plot to get interesting, the same cannot be said for Anthem’s awful mission design and terrible rewards system.

So many critical path objectives involve gathering scattered orbs, runes, or other objects and carrying them back to a central location. After finding three, five, or sometimes even more than 10, players need to defend the area from an oncoming wave of enemies. I’m not exaggerating when I say almost every story mission in Anthem features a section like this. Sure, this structure encourages players to talk to one another as they fly around, but after the third time doing so, it feels incredibly stale.

These quests were built to accommodate four players at a time—as was all of Anthem. But unlike Destiny, there are no missions that are off limits to anyone who isn’t in a dedicated squad. I appreciate that openness from BioWare, as I have a tough time finding friends to complete Raids or even tougher Strikes in Destiny 2. But it hampers the creativity of Anthem’s levels.

More often than not, players are exploring cavernous chambers or tight hallways deep underground. Door-opening puzzles and cooperative horde modes break up the pace of open exploration with frustrating frequency. And the tether that keeps players close together is limiting to an infuriating degree. If you happen to fall behind your fellow Freelancers, the game pressures you to join them in under 30 seconds, or else you’ll be kicked to a loading screen and respawned nearby.

Not only are these instances annoying, they break immersion. I missed several chunks of story dialogue because my character was being warped away. even if I could see my teammates just mere meters away. My Freelancer would talk about things that weren’t even visible on-screen, as a random teammate had already rushed ahead and cleared the next objective.

Anthem wants to be the kind of game you and your friends log in to every day. The foundation is laid in a way to track weekly objectives, discover new sights, and build toward significant unlocks. The problem is, despite the undeniably beautiful vistas it offers, almost nothing in Anthem is exciting. The flight mechanics and character mobility are a joy to control, but so is Microsoft Flight Simulator.

None of the armor or weapons currently available are distinct, memorable, or appealing. With multiple currencies to keep track of, making serious progress on any one Javelin requires grinding out the same missions over and over again. I spent hours out in the wilderness looking for Chimeric Alloy, only to come back to Fort Tarsis and craft a shotgun that looked identical to the one I was already using but did slightly less damage.

BioWare has already unveiled a roadmap for the future of Anthem. With new quests, gear, and game modes coming in the next few months, here’s hoping Anthem can change. Underneath all the frustration, there are great ideas. Boosting your exosuit around, glinting in the sunlight, and nosediving into a pool of water still feels amazing. I can’t deny the thrill of soaring through this open world, but that comes hand-in-hand with enduring a slog of lackluster mission design.

I’m not giving up on Anthem. Perhaps the game will be fundamentally different in a few months, as the proper endgame comes to life. If BioWare can salvage the great gameplay ideas the game is built on and streamline some of the obtuse checklists, maybe Anthem will become the engrossing, living world I wanted it to be. But maybe I’m searching for something that was never there.

Anthem is available now for PC, PS4, and Xbox One. This review was written based on an Xbox One version of the game provided by the publisher.