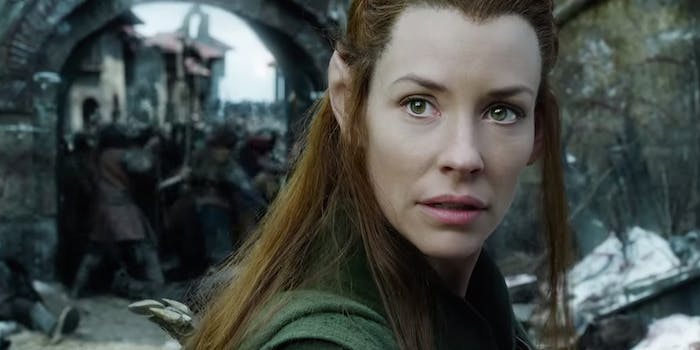 7 things to know before you watch ‘The Hobbit: The Battle of the Five Armies’

It's time to get ready for our last journey in Middle-earth.

The Hobbit: The Battle of the Five Armies debuts in theaters Wednesday and will certainly leave fans with mixed emotions.

On one hand, it’s the end of an era. Prefixed by The Lord of the Rings trilogy—both in book and film—The Hobbit trilogy was our chance to revisit the magic of Peter Jackson’s Middle-earth, particularly after he finally agreed to direct the films himself. We got to see a book many of us have enjoyed since childhood brought to life, and it’s probably the last of Tolkien’s world we’ll get anytime soon. (The Tolkien Estate holds the rights to the rest of J.R.R. Tolkien’s works and Warner Bros. isn’t exactly on the best of terms with them.)

On the other hand, the Hobbit trilogy is one of the best examples of stretching out the source material as thin as possible, seemingly for the money. It turned a 300-page book into three lengthy and lucrative films. Although there are a lot of new things in the films that you certainly don’t remember reading in your battered copy of The Hobbit, many of the deviations from the story do exist in Tolkien lore, mainly through inferences, hints, and a large section of the Appendices (located with some copies of The Return of the King). The parts straight from pen of Tolkien are also interwoven with a few new add ons created just for the movie.

So, when it comes to figuring out what may happen in BOFA, it’s not as easy as picking up your book and figuring out what of plot points from the 72 pages left to adapt will make it into the film’s 144 minute timeslot. But based on what we’ve seen already—and yes, picking up the book again—we can try piecing it together.

Considering that the title of the film contains the words “battle” and “armies,” this seems like a no-brainer, but there’s a good reason to note this: Bilbo Baggins is a fairly shitty narrator of his own story.

Most of the time, Bilbo’s internal thoughts dream of food, home, and relaxation in Bag End; sometimes, when stuff needs to get done, his more adventurous Took side (aka the more curious and assertive side) takes over. Once the actual battle starts he puts his ring on and stays out of sight (and out of the way) as he stands with Gandalf and the Elves of Mirkwood. When all seems lost, Bilbo alerts everyone that the Eagles are coming to their aid against the Goblins and Wargs, and then he’s knocked unconscious by a stone. And since he was still invisible with the ring on, everyone believes him to be dead for a time.

Once he comes to, the battle is over and he hears what happened second-hand. We know little about what happens with the other four armies involved, who died—and how—or even the plotting involved. It’s a dreadful battle by all accounts, but a few pages won’t translate well to screen without some expansion. And with Jackson devoting 45 minutes of the film to that battle, we’re bound to get glimpses into all sides involved.

What really happened in Dol Guldur and Lake-town

Since The Hobbit is mostly told through Bilbo’s eyes and not multiple perspectives, we only find out where Gandalf went on his “pressing business away south” (Radagast the Brown, while mentioned by name, never makes an appearance) and Smaug’s attack on Lake-town while Bilbo and the Dwarves stayed hidden in the Lonely Mountain, which is covered in the chapter “Fire and Water.”

Since these things are happening around the same time as the events in BOFA, it only makes sense to include them to pad-out the movie. We’ll likely follow the ever-grim Bard the Bowman, along with Legolas, Tauriel, and the Dwarves left behind in The Desolation of Smaug.

As far as Gandalf’s affairs go, we’ll finally get to see the White Council in action. Although Saruman’s involvement isn’t obvious yet, he’s on Gandalf’s side to fight off the Necromancer (Sauron), and from what we can tell from the trailers, they will also have Radagast, Elrond and Galadriel with them. Expect some impressive magic.

Spoiler alert: everyone who appeared in LOTR survives the film

BOFA might not necessarily have its hands tied when it comes to canon (as much as book purists might not like it), but it does when you factor in the three LOTR films. Since The Hobbit is a prequel of sorts to LOTR, you have to keep some continuity there or else creative massive plot holes and an alternate Tolkien universe.

Bilbo, as seen in the opening of An Unexpected Journey with Frodo shortly before his 111th birthday party (which plays out in The Fellowship of the Ring), obviously makes it out alive. The same goes for Gandalf, Legolas, Elrond, Saruman, and Galadriel, who are all in LOTR.

As far as the Dwarves go, three deaths are set in stone in the book, but the film could possibly kill more of them. Gloin, who is briefly seen with Gimli at the Council of Elrond in FOTR, makes it out and across Middle-earth to Rivendell, although he’s never mentioned by name. And we’ll have at least three surviving Dwarves in Balin, Oin, and Ori, who need to stay alive long enough to try recolonizing Moria—only to get killed before the Fellowship makes its way to what becomes their tomb.

Benedict Cumberbatch gets defeated twice—and you never see his face

In the Hobbit films, Benedict Cumberbatch plays not one—but two—characters with the help of motion capture technology: Smaug the great and terrible and the Necromancer. Seeing how both Smaug and the Necromancer aren’t really issues by the time LOTR starts, it’s probably safe to assume they both go down in spectacular fashion.

If you haven’t read the books, Stephen Colbert hints at Smaug’s demise during a recent interview with the dragon (yes, that happened). And although Sauron is a pretty gigantic threat to Middle-earth in LOTR, you don’t hear a peep about his reign as the Necromancer.

I really don’t want this to be true, but the odds of the Mirkwood Elf making it out of this movie alive look slim, and that’s in part due to the canon set in LOTR.

As a character created by Jackson to make The Hobbit a marginally smaller sausage fest, Tauriel isn’t in LOTR or The Hobbit, and with the first trilogy coming out more than a decade ago, you can’t insert a new character into an old film. She’s an important character and one Legolas trusts. If you kill her, you don’t have to worry about people wondering where she went in a set of films where she didn’t exist.

The other thing that could kill her is that she’s in a love triangle, and with double the romantic possibilities comes double the chances of manpain.

When actress Evangeline Lilly first signed on to play Tauriel, she only had one condition: that her character wouldn’t be part of a love triangle. That promise was broken after the studio came back with notes asking for a love triangle during reshoots, which is why we’re stuck with a polarizing love triangle between Tauriel, Legolas, and Kili the dwarf.

With that in mind, Tauriel could die a couple ways: fueling Kili to avenge her and die in the process, or fueling Legolas to successfully kill whoever killed her. Tauriel deserves better than that, and if she is going to bite it in BOFA, let it be of her own agency.

Despite your opinion on The Hobbit as a whole, BOFA will mark the end of our journey in Middle-earth. Jackson and company picked one of the original members of the Fellowship to send it off: Billy Boyd.

The musician and actor played Peregrin Took in LOTR, and he certainly has the pipes for it. But picking him to help write and sing “The Last Goodbye” isn’t just a send-off for The Hobbit, it’s a send-off for Middle-earth. For Tolkien fans who’ve stuck around for years, it’s one last emotional punch to the gut.

Stephen Colbert will not be taking over the role of Legolas

One of the world’s biggest LOTR fans already made his cameo in The Desolation of Smaug, but after seeing him cosplay as the Sindarin Elf for Entertainment Weekly, I kinda wish he were. It may be jarring at first, but we’d get used to it.