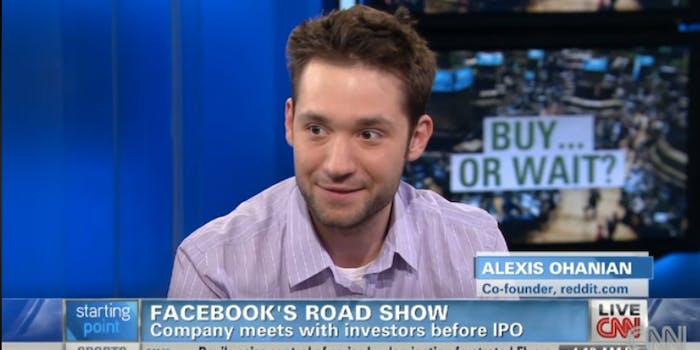 Alexis Ohanian explained on CNN why he wouldn't be investing in Facebook stock anytime soon.

Though both are young, successful Web entrepreneurs, Ohanian has a warm and charismatic public persona, went to a state college (the University of Virginia), and lives in Brooklyn. Zuckerberg is often accused of being stiff and calculated, went to Harvard, and moved his company to Silicon Valley.

But there’s an even greater distinction between the two: Zuckerberg is perceived as having extremely poor track record when it comes to respecting user privacy. Ohanian, on the other hand, told CNN on Monday that he won’t invest in Facebook because Zuckerberg’s company won’t take a stand against American legislation that could violate user privacy.

In an interview Ohanian embedded on his personal website, Ohanian indicated that it was wrong for Facebook, which “knows things about our private lives that no one else does,” to condone the Cybersecurity Intelligence Security Information Act (CISPA), which could make it easy for a company to share personal user data with federal intelligence agencies.

Reddit officially took a stance against CISPA on Friday.

“One of the big issues that a lot of us in the tech community have had as of late has been their support of bills like CISPA,” Ohanian said. “They make it really easy for a business like Facebook to hand over very private data about us without any due process.”

Ohanian said he wouldn’t buy stock in Facebook, at least not yet, because he didn’t want to support the company.

Ohanian and Reddit were among the leaders in the successful Stop Online Piracy Act (SOPA) protest. Facebook’s efforts, on the other hand, were largely confined to an anti-SOPA status update Zuckerberg posted on his wall.

Reddit didn’t post an official policy on CISPA until after the bill passed the House of Representatives and entered the Senate, but the company has since renounced the bill and promised a blitz of information and activism against the it.

While Facebook has expressed some reservations about CISPA, it nevertheless wrote an early letter of support for the bill.