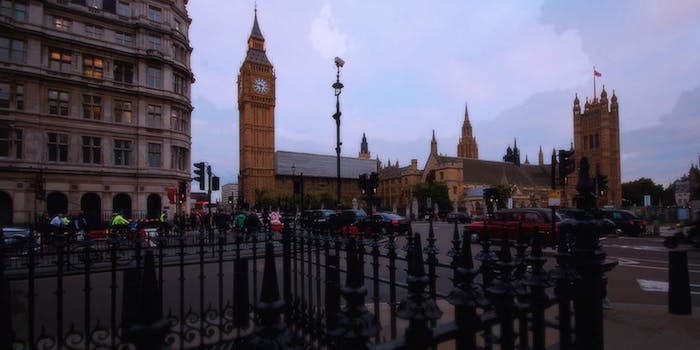 The editor of the Guardian testified before the British House of Commons over the paper’s role in the disclosure of classified documents.

The editor of the Guardian testified before the British House of Commons on Tuesday over the newspaper’s role in the disclosure of classified intelligence documents.

Alan Rusbridger was summoned before the home affairs select committee following accusations last month by three top intelligence officials in Britain who told Members of Parliament that the publication of files leaked by American whistleblower Edward Snowden had impaired their agencies’ ability to conduct counter-terrorism operations.

John Sawers, the head of the foreign intelligence service, MI6, told Parliament, “It’s clear that our adversaries are rubbing their hands with glee. Al Qaeda is lapping it up.” Similarly, Sir Iain Lobban, director of Government Communications Headquarters (GCHQ), claimed that his agency had monitored terrorists as they discussed new ways to avoid surveillance based solely on revelations published by the Guardian.

Unlike the spy agency chiefs, however, Rusbridger was not provided the questions he was asked in advance. 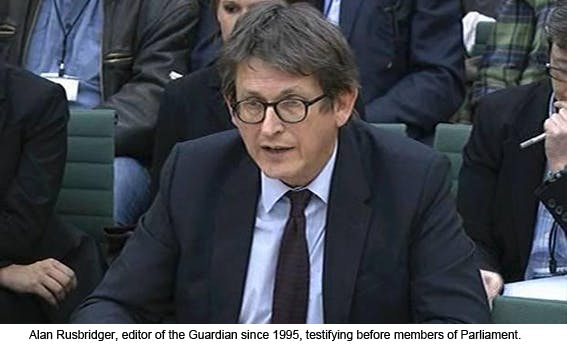 The committee hearing began Monday afternoon with Chairman Keith Vaz addressing the issue of whether Rusbridger was aware his participation in the meeting was voluntary. Rusbridger told the chairman, “I wasn’t aware it was optional, but I’m glad to be here anyway.”

Rusbridger was asked about the number of people who allegedly have the same level of access as Snowden. “Obviously, people were aghast, I think people at GCHQ were aghast, that a 29-year-old in Hawaii, not even employed by the American government, could get access to their files. And I was told the figure of 850,000 people who had that kind of access,” Rusbridger said.

Rusbridger had the opportunity to respond to the accusations of the intelligence chiefs, specifically statements by the heads of MI5 and MI6, who claimed extensive damage to the security of Britain. Rusbridger noted that the editors of major newspapers, each with considerable experience in handling national security documents, all arrived at the same conclusion: that publishing Snowden’s material was undoubtedly necessary.

“The problem with these accusations is that they tend to be very vague,” Rusbridger said. “They’re not rooted in specific stories. You quoted two, I would like to quote four people back at you who have told me personally that there has been no damage.”

After further inquiries into the secureness of GCHQ files, Vaz suddenly asked Rusbridger, “Do you love this country?”

Rusbridger’s interview took a stranger turn as Conservative Party member MP Michael Ellis inquired as to whether the Guardian had documents that might reveal the sexual orientation of GCHQ employees.

“You’ve completely lost me Mr. Ellis, there are gay members of the GCHQ, is that a surprise?” Rusbridger responded to the question, leading to laughter in the Wilson Room.

Ironically, Ellis suggested that the privacy of the GCHQ had been violated by the Guardian. To date, the Guardian has not published on the sexual orientation of any spies. 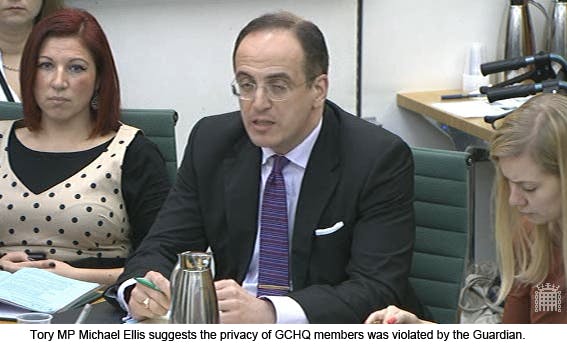 In another line of questioning, Ellis asked Rusbridger if the Guardian would have alerted the Nazis to intelligence gathered on the Enigma machine, a crypto-device used by the Germans in World War II. “That is a well-worn red herring, if you don’t mind me saying so, Mr. Ellis,” Rusbridger replied.

While the Guardian’s handling of the classified documents remained the primary focus of the inquest, Rusbridger was asked his opinion on other matters, including whether Parliament is currently afforded enough oversight of the intelligence services. He told the committee that he knew the British lawmakers had been both anxious and appalled to learn the extent of the surveillance revealed in Snowden’s documents, which had occurred, in many instances, without their prior knowledge.

Rusbridger also pointed out that a few American lawmakers had taken steps to instigate a reform of the broad surveillance powers of the National Security Agency. He specifically mentioned Patriot Act author Rep. James Sensenbrenner and Sen. Dianne Feinstein, who’s called for a review of the authority held by U.S. spies.

“The people who are most disturbed by the revelations include the people who passed the laws that are being used to justify it,” Rusbridger told the committee.

Not all of the members of Parliament were interested in Rusbridger’s perspective, however. Tory MP Mark Reckless suggested that the act of transferring Snowden’s materials—specifically those that contain the identities of GCHQ employees—to the New York Times, outside of Rusbridger’s “jurisdiction,” constituted a criminal offense. Rusbridger pointed out that the government had known for many months that the Guardian was sharing files with the Times and that he had even communicated that fact with the cabinet secretary last July.

“You have, I think, Mr. Rusbridger, admitted a criminal offense in your response,” Reckless said. He then asked whether Rusbridger thought it was in the public’s interest that he be prosecuted.

Rusbridger responded, “I think it depends on your view of the free press, really.” 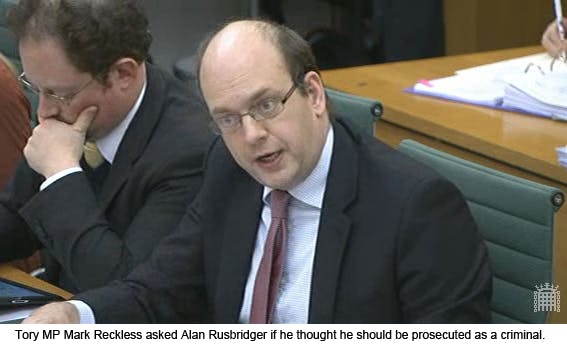 When asked by MP Paul Flynn if he agreed that the Guardian had performed an important public service, Rusbridger told him, “It’s self-evident. If the president of the United States calls a review of everything to do with intelligence and that information only came in to the public domain through newspapers, then it is self-evident, is it not, that newspapers had done something which oversight failed to do? And I would say that was true of this country and of the United States.”

Rusbridger also told the committee that the Guardian would not be intimidated. The paper would continue to publish Snowden’s documents in a responsible manner, he said.

Before the conclusion of the meeting, Rusbridger added that since Glenn Greenwald left the newspaper, it’s had no further contact with Snowden.