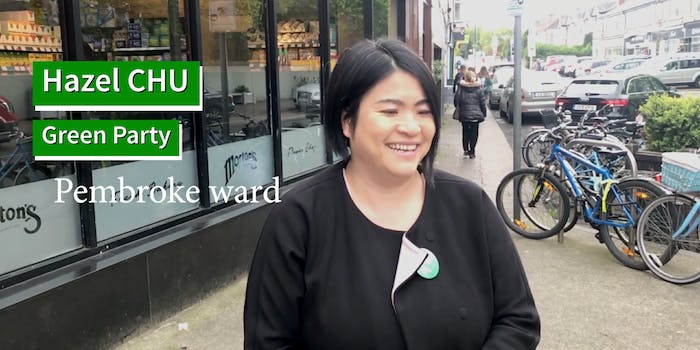 'You folks probably got half my vote for me.'

The page, “Ireland Simpsons Fans,” gained prominence for lampooning the ongoing Brexit situation and other happenings in European Union politics. The meme group has over 90,000 members on its Facebook page and nearly 40,000 followers on Twitter.

The page mocks everything from Theresa May’s resignation, the United Kingdom’s love of its precious blue passport, and even the recent rash of milkshake attacks on far-right British figures.

So long, Theresa May pic.twitter.com/sNaAIfDlVY

I've got a blue passport, do you? pic.twitter.com/wQ1nu9LcZT

Which episode of British politics did you enjoy most this week? pic.twitter.com/Y4V7FyyYx3

On May 19, Chu tweeted that she had found a meme in support of her campaign on the Ireland Simpsons Fans Facebook page. The image in question featured a cartoon train with Chu’s face superimposed urging Dublin voters to “Choo-choo-choose” Chu for city council as an Irish Green Party member. (It’s a Valentine’s Day card that Ralph Wiggum gave Lisa.)

Now, Chu has been elected as a city council member for Dublin’s Pembroke ward.

Spotted this on @iresimpsonsfans Facebook page. I FINALLY made it!! YAS!!

I shall be using these for my next campaign (no I'm not kidding). #LE19 #Simpsons pic.twitter.com/QhhrCCvzYE

After her victory on May 24, Chu could not forget to thank Ireland Simpsons Fans, remarking that the meme-makers were no doubt a significant part of her voter base.

“You folks probably got half my vote for me,” she tweeted on Monday.

How could I forget @iresimpsonsfans! You folks probably got half my vote for me.

And all the 3-12 yr olds who made songs, rhymes, influenced their parents to vote for me. You are the next leaders in the country, call me & I'll canvass for you!

The Simpsons has occasionally been weirdly prescient when it comes to politics. Additionally, in 2018, a joke about “steamed hams” from a 20-year-old episode of the show became one of the biggest memes of the year. Now, a hyper-niche meme page based on The Simpsons has played at least a small part in getting someone elected to office.

The page replied by continuing to meme Chu, proving that in the odd political landscape of 2019, sometimes leaning into it really is the most sound strategy.

I, for one, welcome our new Chu overlord pic.twitter.com/u5VJ2r411O