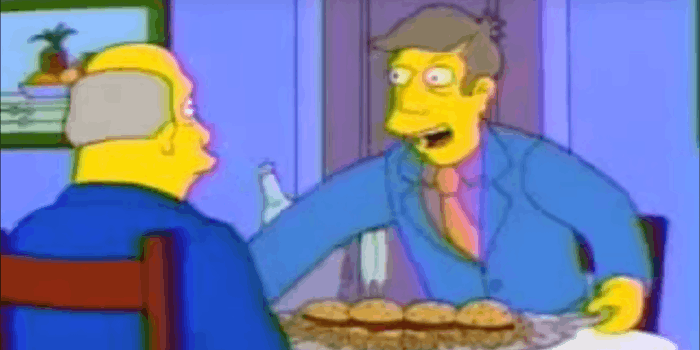 That's what I call hamburgers.

If you grew up with The Simpsons, it’s impossible to forget the time Principal Skinner told Superintendent Chalmers that he calls hamburgers “steamed hams.” And if you didn’t, the “steamed hams” scene is inescapable anyway. Simpsons shitposters have adapted it for the social media age, and it’s now a garbage meme that brings back the fun of seeing “steamed hams” for the first time.

In case you somehow missed it, here’s the bit in question:

“Simpsons Shitposting,” the practice of making intentionally low-quality Simpsons memes, has been around for years and has inspired a popular and much-praised Facebook group. The memetic resurgence of “steamed hams” seems to be something else, though. Writing for Polygon, Allegra Frank traced it back to a November thread on Reddit‘s popular r/videos forum. It started with the original “steamed hams” video, but a world of bizarre remixes gradually revealed itself.

There was the Guitar Hero version:

And a whole bunch of other “Steamed Hams but it’s [insert video game here]” examples:

These “it’s one thing, but it’s another thing” videos became dominant in Weird YouTube culture in 2016, and initially centered around the 2007 animated comedy Bee Movie. “It’s Bee Movie, but every time they say “bee” it gets faster,” is the canonical example.

In 2017, this editing style, now a signature of Weird YouTube memes, was applied to the cartoon Jimmy Neutron.

Simpsons writer Bill Oakley even shared an original draft of the scene, acknowledging the meme. He wrote “Steamed Hams, but it’s the original first draft in a thread.”

The Simpsons is a fascinating subject that probably deserves a doctoral thesis, but here’s the short version: The Simpsons was one of the most quotable shows of the ’90s, and its best lines became word-of-mouth schoolyard memes before the internet was mainstream. It’s now popular on social media, but it was too early to be a “meme show” like Spongebob Squarepants and Jimmy Neutron. Memes today are dominated by kids born in the ’90s and early ’00s, currently in high school and early college. They know The Simpsons, of course, but it didn’t define their sense of humor in the way it did for the in-between generation born in the early-to-mid ’80s.

That may be why “steamed hams” is now having a moment. While “olds” have already cemented their idea of what the scene could be, kids who grew up with remix culture are able to look at with fresh eyes and transmute it into a hilarious, millennial pile of shit.

Correction: A Bee Movie was originally released in 2007.