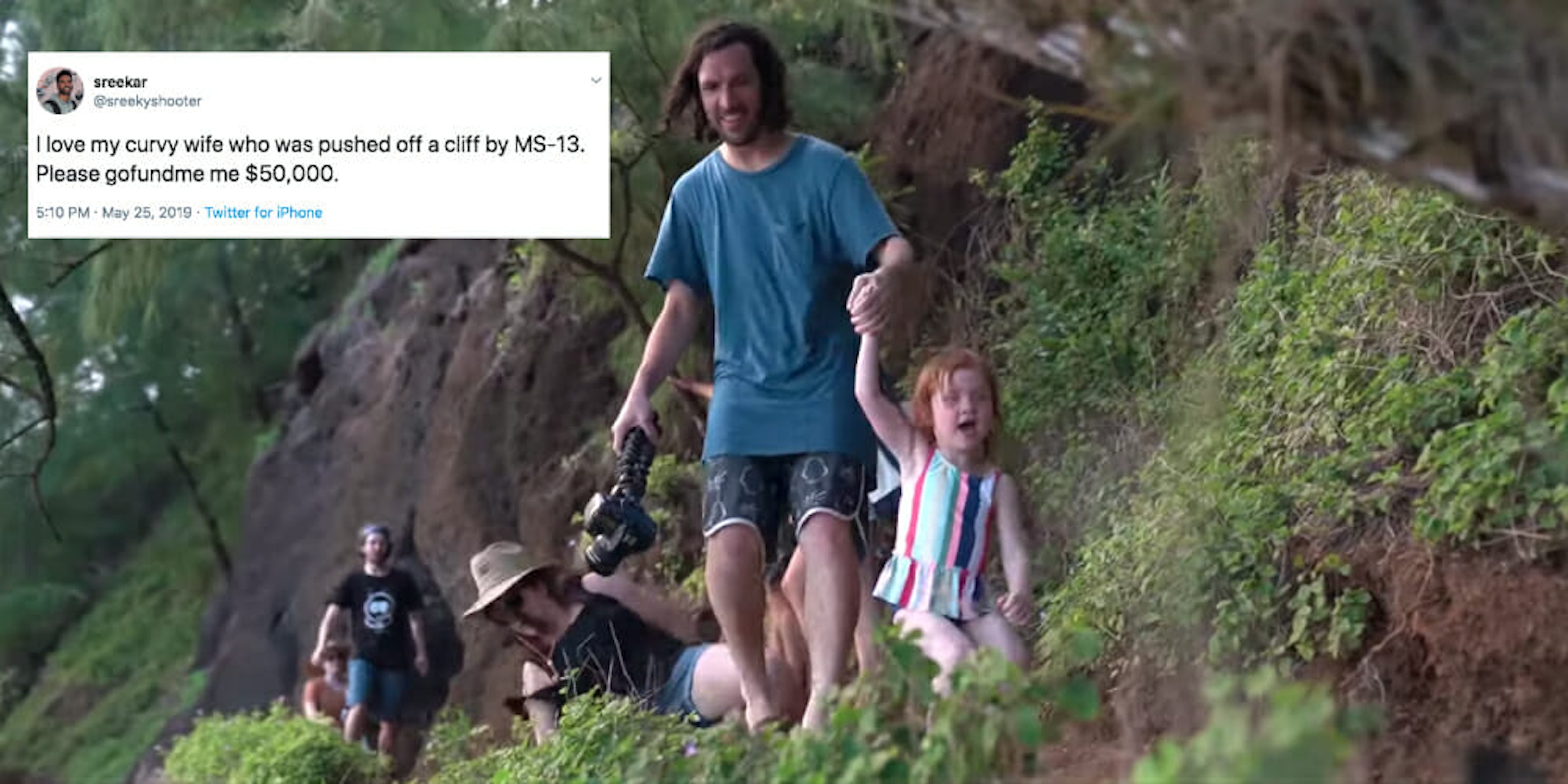 Here’s what that ‘cliff wife’ meme is all about

A YouTuber's wife literally fell off a cliff–and he filmed it.

Cliff wife can now join the ranks of curvy wife, email wife, and elf wife in the meme-verse.

Today is another Wife Day on Twitter. In this case it's the classic "Cliff Wife."

Shaun McBride, who goes by Shonduras on YouTube, filmed the moment his wife Jenny McBride fell down a cliff.

Shaun later uploaded a video of Jenny recounting the moment she fell.

“I remember turning and trying to grab … grab anything because I literally thought I was gonna die,” an emotional Jenny says. “It just changes your perspective, like even the littlest things shouldn’t bother you cause you never know. Life could change in a split second.

The video includes a disclaimer about material that may “not be suitable for some audiences.”

Of course, the size of the cliff Jenny fell down was brought into question–with some wondering if it even constitutes as a cliff.

People were also caught up on the fact that Shaun was just there, filming the whole thing, while his wife was tumbling down the cliff.

Because when my wife falls off a cliff, the first thing that I should do is get out my iPhone camera.

i watched my wife fall off a cliff…
you’re whole world can change in a matter of seconds. mine almost did. a good reminder to be grateful for every moment of it. the good and the bad. the happy and the sad. because you’re here. pic.twitter.com/BEO8OhXZAx

i watched my wife fall off a cliff…
you’re whole world can change in a matter of seconds. mine almost did. a good reminder to be grateful for every moment of it. the good and the bad. the happy and the sad. because you’re here. pic.twitter.com/IRkr6P9ZKf

Other viral moments of the hour were also brought into the mix, including curvy wife and the guy who made a viral hoax about stealing drugs from MS-13.

please. my wife. she fell off a cliff. pic.twitter.com/bAhfIG7q1d

please be with me and my family during this trying time. My wife fell off a cliff and then exploded

shout out to the og cliff wife, pic.twitter.com/N47O77LEfY

I love my Wife. I hate it when she falls off a Cliff. I love when our video about it Goes Viral, though I hate to think of what could’ve happened in a Matter of Seconds.

the only cliff wife i care about pic.twitter.com/aRY5VB5P4A

Welcome to the club of that good wife-based online content, cliff wife.

crying laughing alone in the car at all the different wives of online. just ruining my makeup. curvy wife, elf wife, the wife who was emailed, the wife who fell off a cliff. every day a new wife for us to guffaw about. an endless parade of wives.