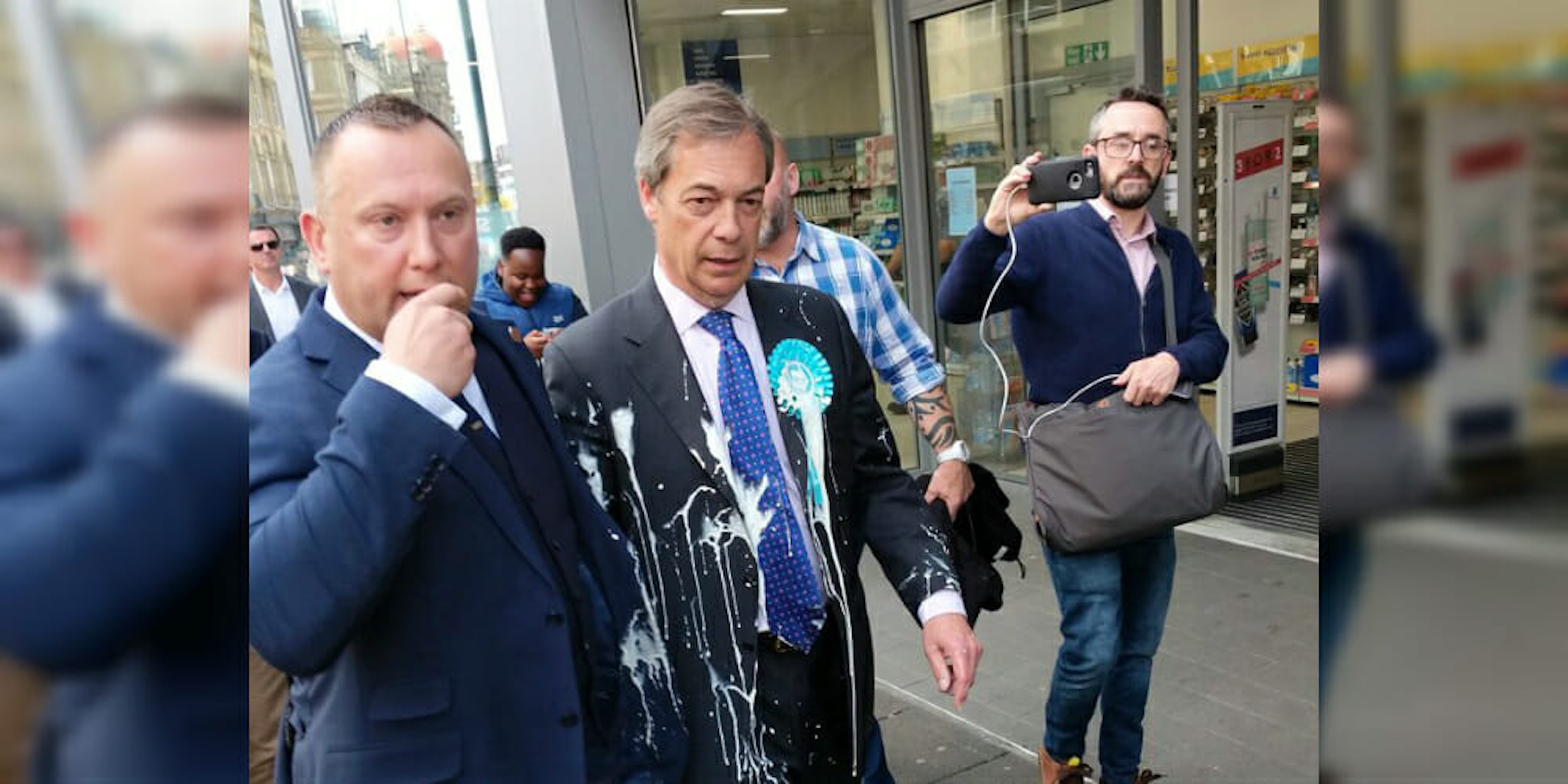 The number of milkshakes being thrown at far-right politicians in the U.K. is growing exponentially, and people around the world are enjoying the footage.

In just the last week, one candidate for the U.K. Independence Party (UKIP) has had four milkshakes thrown at him, with only two making contact. The candidate in question is Carl Benjamin, better known to the internet by his YouTube channel name, Sargon of Akkad. He rose to notoriety by pushing a Gamergate conspiracy theory that a nonprofit game studies organization was plotting to influence game developers to put feminist ideology in video games. His next step up the infamous food chain was in 2016 responding to politician Jess Phillips’ story of all the rape threats she receives with, “I wouldn’t even rape you.”

Somehow these conspiracy theories and rape “jokes” earned him an endorsement from UKIP leadership, and he’s officially running for European Parliament. At the press conference announcing his candidacy, he refused to apologize over his comments about raping Phillips and called her a bitch. Now you know why people keep throwing milkshakes at him, and why other people celebrate every drop of dairy on his head.

May this video of Nazi-lover and anti-feminist Carl Benjamin covered in milkshake cleanse your soul as it has mine pic.twitter.com/oCa8LhFJix

All of this milkshaking of UKIP politicians led to police telling a Scotland McDonalds not to sell milkshakes on Saturday because it was near a rally for Brexit Party leader Nigel Farage. The sign in the window was mocked on social media, while Burger King slyly promoted their milkshakes as an alternative.

Farage could not escape being milkshaked, however. A Five Guys banana-and-salted-caramel number drenched Farage’s suit today. The man who sacrificed his shake reportedly said to the press while handcuffed, “I was quite looking forward to it, but I think it went on a better purpose.” The video is worth watching more than once to take in all the different reactions, including a security guard exclaiming “Oh, not again!” and a person following and pointedly laughing like Nelson from The Simpsons.

the greatest thing about the Farage milkshake video is the person shrieking with laughter throughout the entire thing pic.twitter.com/Z2rWYbtIui

Farage tweeted, presumably after changing out of his sticky suit, that “remainers have become radicalised, to the extent that normal campaigning is becoming impossible.” However, people called him out for both hypocrisy and pretending far-right violence doesn’t exist.

You said you'd pick up a rifle and head to the front lines if brexit wasn't delivered. Shut up about a fucking milkshake. pic.twitter.com/gbcp4SuYBj