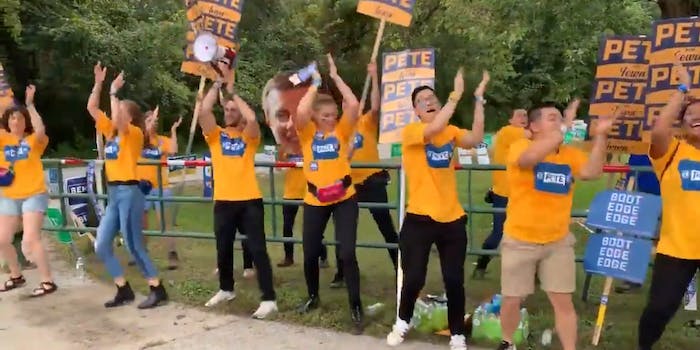 The Pete Buttigieg ‘High Hopes’ dance was designed by an intern

A few months ago, the world had yet to experience it. Sometime in October, it began to take hold. By November, it was everywhere.

As videos of supporters of Democratic presidential candidate Pete Buttigieg doing a choreographed dance to his campaign hype song “High Hopes,” by Panic! at the Disco swept the nation, people had a lot of questions and even more opinions.

The one question that no one could answer was who, precisely, is responsible for the viral dance craze?

The answer is both surprising and surprisingly obvious: an intern with an assist from a volunteer.

Multiple sources have confirmed that University of Chicago student Charlie Rollason came up with the viral choreography for the chorus while interning for the Buttigieg campaign in Iowa over the summer.

Rollason did not respond to multiple requests for comment. She did approve a reporter’s request to follow her locked Twitter account, however, where she has referenced creating the moves, which at least one person has called the “Wing Ding dance routine,” on several occasions.

Although multiple outlets have reported that the first video was released in September, the dance actually hand-rolled and clapped into the public arena more than a month earlier. Rollason created the dance sometime prior to the Aug. 9 Iowa Wing Ding fundraiser. There, roughly a dozen Buttigieg supporters would become the first “High Hopes” dance party.

The fun might’ve ended then had the video not been spotted by the candidate’s husband Chasten Buttigieg.

As the dance started catching on, another Buttigieg supporter saw it. Amy Ohrstrom told the Daily Dot that she and members of Barnstormers for Pete, which isn’t affiliated with the official campaign, thought it would fun to get a large group to do the dance for the Liberty and Justice Celebration dinner on Nov. 1.

“Pete was gonna hold a rally at the dinner outside in a park and the plan was—if we could—to break out into this dance at the park,” Ohrstrom said.

Ohrstrom said she supports Buttigieg because he’s running on more than just defeating President Donald Trump and because she agrees with his policies. “I feel very strongly that he can do that, that he can unite this huge division that we have right now. I really appreciate his demeanor and quiet strength,” she said.

On Nov. 2, the day after the dinner, Ohrstrom and about 100-150 other people performed the full dance in a park nearby.

“It was just very joyful. It was a lot of fun,” she said. “[I] woke up and found videos of people doing it at a restaurant and just having a blast.”

Part of the dance’s appeal is how accessible it is. Pretty much anyone, regardless of dancing ability or physical condition, can do it. (Well, except for Pete Buttigieg.) Ohrstrom said it was important to her to make sure it could even be performed in a wheelchair.

Over the next few weeks, videos of it began popping up all over the place. Some of the most popular quickly racked up tens of thousands of views.

By late November, it was everywhere.

Along with the praise and laughter, however, came criticisms and mockery. Writers called it “cringey” and “cynical.” Online it was weaponized as a meme and slammed for being too white.

Buttigieg is doing well in New Hampshire and Iowa because he only appeals to white boomers with his stupid dance https://t.co/hpA5rKzXVn

Anyone who's not extremely white when they start doing that corny dance at the Pete Buttigieg events: pic.twitter.com/3lJizLkhla

In my travels I came across a troupe of former Buttigieg volunteers who had been cast out for missing steps in the official campaign dance.

Friday they take the stage with new life in turkey costumes as part of my “No Gobbledygook” song and dance.

Even Saturday Night Live got in on the joke. “It’s all part of Mayor Pete’s strategy to get a negative percentage of the Black vote,” quipped comedian Colin Jost, referencing some polls that show a dearth of support for Buttigieg among Black voters.

People unfamiliar with internet culture, which has an undeniable tendency to reward bad behavior, might find the criticisms excessive and unwarranted.

It is, after all, just a simple dance routine not unlike the Electric Slide or Macarena of days gone by and weddings coming soon. It’s fizzy effervescence, sugar-coated-sugar, the physical manifestation of exuberance. It has the ability to make you high. It can also set your teeth on edge. Although in real life, people are more apt to keep such thoughts to themselves, on the internet, the gnashing of teeth tends to get the most attention.

Ohrstrom, an engineer, doesn’t let the haters get her down.

“I don’t know what causes you to feel like you need to put other people down,” she said. “I just mostly ignore it. I think there’s far more people [who] find joy in it.”

Regardless of whether Buttigieg finally reveals his “High Hopes” moves, Ohrstrom is thrilled to have played a part.

“Charlie really was the one who got the whole thing started. I just feel lucky that I got to be part of spreading it and I’m happy to see that it took off.”