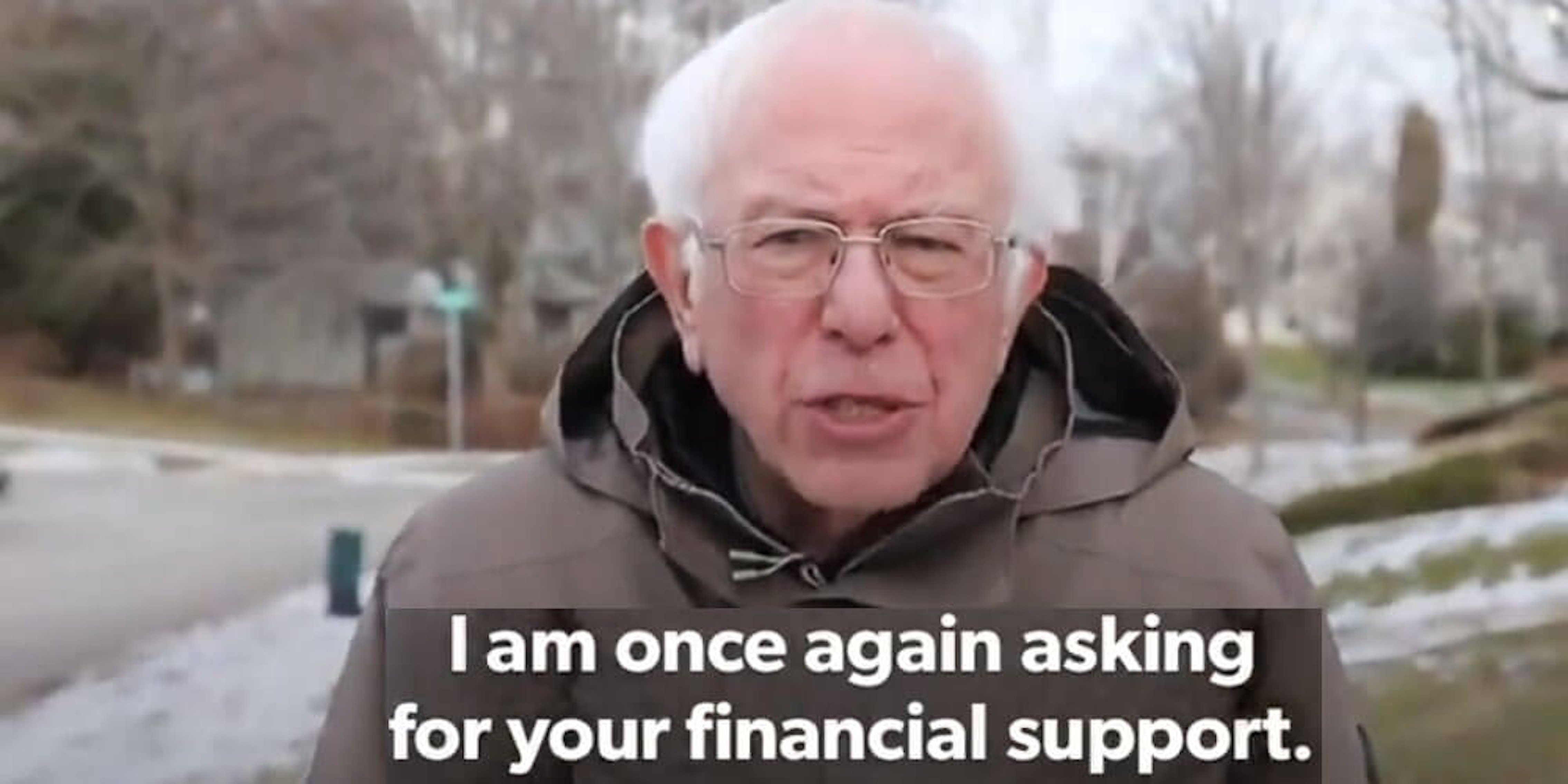 'I swear this is the last time. mom!'

One of the tenets Sen. Bernie Sanders (I-Vt.) has always run his respective presidential campaigns on is that he is the only candidate who relies solely on grassroots donations through both the primary and general elections—should he make it that far. Care for him or not, you kinda have to give the man credit where credit is due. (Although it certainly doesn’t hurt that he’s got a fervent base of supporters more than happy to throw money at him, hand over fist.)

And it’s this steadfastness to his principles that has earned Sanders yet another indelible status as a meme, this time, as he is “once again asking for your financial support.”

On the cusp of the new year, Sanders posted the following fundraising video across his various social platforms to make a plea for a last-minute contribution.

“As the FEC fundraising deadline for 2019 approaches, I am once again asking for your financial support,” Sanders said to the camera, dressed in a smart khaki parka.

The truth is, we have an excellent chance to win the primary and beat Trump.

But the only way we can do that is if we have the sufficient financial resources.

So I am asking you today to contribute to our campaign before the FEC deadline: https://t.co/9y9BZMs0GM pic.twitter.com/wnYbUDBynW

“I’m not running all over this country, raising enormous sums of money from some of the wealthiest people in America,” he continued. “I am so proud of all of us that we have to this point in the campaign, received more individual contributions from more Americans, than any candidate in the history of American politics. That’s the way we raise money. That’s why we’re going to win this election.”

A rousing battle call, for sure! Yet, there’s also something inherently funny about no-nonsense Bernie gruffly asking his constituents, “I am once again asking for your financial support.”

KnowYourMeme sites the first occurrence of the Bernie “I am once again asking for your financial support” meme on January 15, when Reddit user 3RunRickyRun4 posted the image and quote to /r/libertarianmeme subreddit, with the caption: “showing up to my parents after spending another months rent on weed and edm festivals… [sic]”

I swear this is the last time Mom! from libertarianmeme

“The girl from high school who is advertising her pyramid scheme on Facebook,” he wrote.

just a moment of your time

Posted by Shitheadsteve on Thursday, January 16, 2020

From there, it didn’t take long for the meme to spread on Reddit and other social platforms—roasting just about any instance in which someone is shaken down for cash.

Love in app purchases from PewdiepieSubmissions

bruh, i can barely afford a slurpee from memes

And then came the inevitable mashups:

It’s treason then from memes

How can you say “no” to that face? The dog, of course—but we guess Bernie has the look of a very good boy as well.