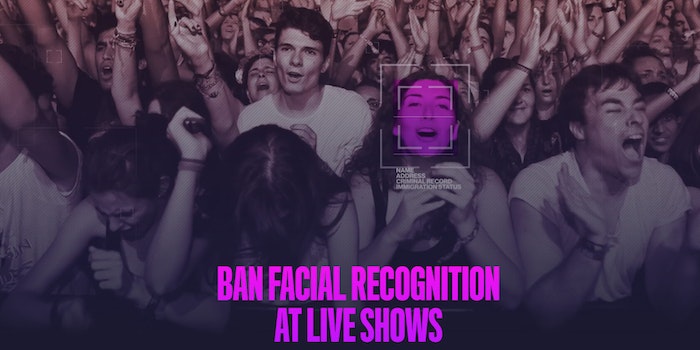 Austin City Limits, Bonnaroo, other festivals pledge to not use facial recognition

The scorecard was launched on Monday.

Digital rights group Fight for the Future released a scorecard on Monday that shows which music festivals have said they won’t use facial recognition technology.

The scorecard shows a number of music festivals that have said they won’t use facial recognition technology, one’s that might, and a way for people to contact festivals telling them they are opposed to them using it.

Festivals like Austin City Limits, Bonnaroo, Electric Forest, and Sonic Bloom were among the festivals that said they won’t use the technology, according to the scorecard.

“The companies that run major festivals should not be experimenting on music fans by scanning our faces and collecting our biometric information,” Evan Greer, deputy director of Fight for the Future, said in a statement. “People deserve to know whether their favorite event has plans to use facial recognition technology.”

“We’re calling on all artists, venues, festivals, and promoters to stick up for their fans’ basic rights and safety by speaking out against the use of Big Brother-style biometric surveillance at live music events.”

Several prominent artists have voiced support for Fight for the Future’s campaign including Tom Morello, Amanda Palmer, Anti-Flag, Brian Fallon, and Laura Stevenson, among others.

Facial recognition technology has been in the national spotlight recently, with some 2020 Democratic presidential hopefuls voicing opposition to its use among law enforcement.

Fight for the Future also launched a campaign calling for a ban on law enforcement use of the technology. More than 30 activist and digital rights groups and organizations have endorsed the ban.