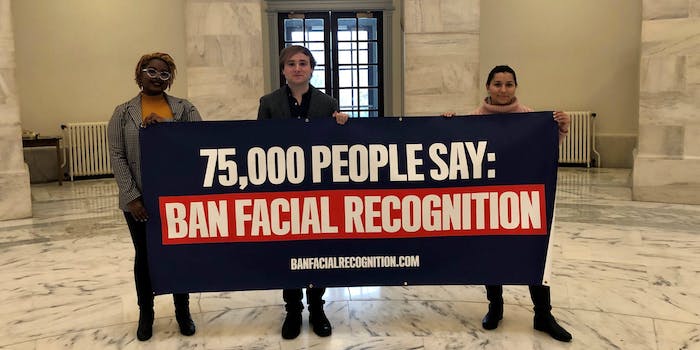 75,000 people call on Congress to ban on facial recognition tech

A petition was delivered to Congress today.

Activists on Monday delivered petitions to members of Congress calling for an outright ban on government use of facial recognition technology.

The petitions were delivered to the offices of Rep. Carolyn Maloney (D-N.Y.) and Rep. Jim Jordan (R-Ohio)—the chairwoman and ranking member of the House Committee on Oversight and Reform.

Petitions were also given to Sen. Chris Coons (D-Del.) and Sen. Mike Lee (R-Utah), who introduced a facial recognition bill in November that was criticized by activists.

All together, the petitions had more than 75,000 signatures, according to Fight for the Future, an internet rights group that announced that the petitions were delivered on Monday.

“This is the single largest display of public opinion on the issue, and the message could not be more clear: people understand that this technology is dangerous when it works and when it doesn’t, and the only way to protect our privacy and our civil rights is to ban its use,” Evan Greer, deputy director of Fight for the Future, said in a statement. “We’re calling on Congress to stop stalling and take immediate and definite action to protect people against the many and unavoidable dangers of facial recognition.”

The signatures on the petitions were from BanFacialRecognition.com, a website set up in July that calls for the ban of facial recognition technology’s use among law enforcement. The call has been endorsed by nearly 40 digital rights and civil rights organizations and groups.

In November, Fight for the Future scanned the faces of people in Washington, D.C. and around Congress using Amazon’s “Rekognition” technology as a way to highlight the lack of strong regulations surrounding the technology.