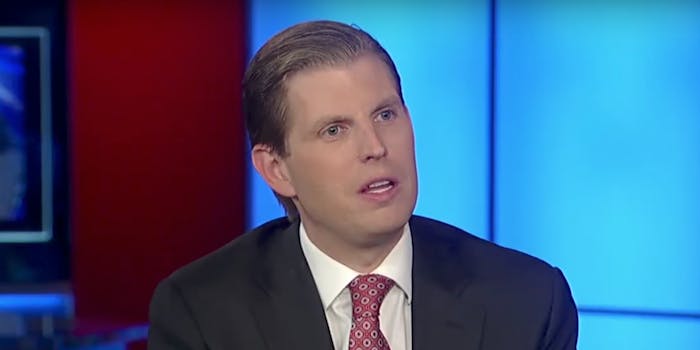 He apparently liked the jokes?

Even without President Donald Trump in attendance, the White House Correspondents’ Dinner proved to be the subject of some controversy, thanks to a pointed, and at times, searing routine by headlining comedian Michelle Wolf. The performance drew outraged reactions from many conservatives, as well as members of the mainstream press. But Eric Trump seemed to enjoy Wolf’s jokes, or at least that’s how his efforts to engage with Twitter made it seem.

The younger of President Donald Trump’s adult sons, Eric has something of a history with not understanding how Twitter works, the most infamous example being when he accused the “deep state” of encouraging him to follow Ellen DeGeneres.

In this case, he simply liked a tweet containing a video of Wolf’s pointed jokes about Press Secretary Sarah Huckabee Sanders, which is definitely not the impression one would imagine he wanted to give off.

The tweet, as shown in the screenshot embedded above, was not critical of Wolf’s performance. In fact, it was quite the contrary―it said “Michelle Wolf destroys Sarah Huckabee Sanders at #WHCD.”

In the past, Eric―who once said Democrats are “not even people“―has been a staunch defender of people in his father’s administration, not unlike his pugnacious older brother, Donald Trump Jr. Assuming there isn’t some sort of secret beef between him and Sanders, it seems like a pretty safe bet that he didn’t mean to appear to endorse Wolf’s scathing routine.

The president addressed the WHCD on Twitter on Sunday morning, calling Wolf a “so-called comedian” and suggesting Fox News host Greg Gutfeld host it next time. The elder Trump did not attend the annual dinner, instead holding a political rally in Michigan. Eric hasn’t directly weighed in on the routine either, at least not beyond the above “liked” tweet.