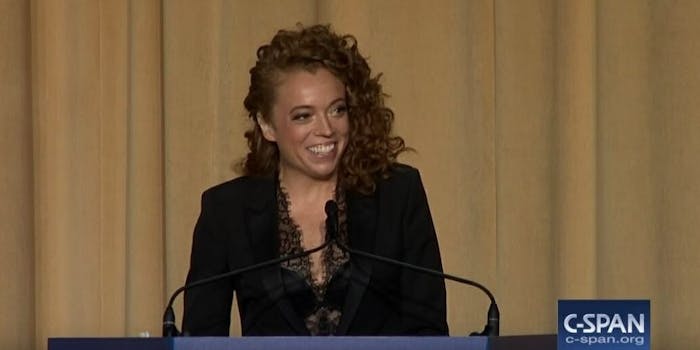 Michelle Wolf targeted everybody. But she was especially harsh to the right.

If you thought people were divided over previous White House Correspondents’ Dinners, you probably didn’t see the performance of comedian Michelle Wolf on Saturday—or read the online reaction to it.

It’s safe to say that after Wolf’s performance, which scorched everybody in the political spectrum, set a new high (or low) for political vulgarities. And that’s just the way Wolf wanted it.

She also targeted the media, saying that Trump “has helped you sell your papers, and books, and TV. You helped create this monster and now you’re profiting off of him.”

And the internet was mixed in her performance and the content of her jokes (remember: Wolf is a comedian telling jokes).

There is tremendous irony to the fact that Michelle Wolf, in making the media look nasty and Democrats spitefully awful, will be hailed as a hero by precisely those groups.

If the #WHCD dinner did anything tonight, it made the chasm between journalists and those who don't trust us, even wider. And those of us based in the red states who work hard every day to prove our objectivity will have to deal with it.

So, a comedian tells a joke, the subjects of the joke get their feelings hurt, and yet no one can find the lie.

The hell you say.

Unfortunately, I don't think we advanced the cause of journalism tonight.

That @PressSec sat and absorbed intense criticism of her physical appearance, her job performance, and so forth, instead of walking out, on national television, was impressive.

Mocking a woman for her appearance? I guess that counts as woke now—just as long as she isn’t progeessive. Or thin. https://t.co/FjgeIcc79J

If some in the press were as hemmed up by this @WhiteHouse’s open embrace of white supremacy, misogyny, mass incarceration, environmental pollution, corporate corruption, and defecation on the First Amendment as they are about what a comedian said, we might be getting somewhere.

My wife @mercedesschlapp and I walked out early from the wh correspondents dinner. Enough of elites mocking all of us

For the second straight year, Trump didn’t attend the dinner, opting instead for a rally in Michigan. But he weighed in on Wolf’s performance.

While Washington, Michigan, was a big success, Washington, D.C., just didn’t work. Everyone is talking about the fact that the White House Correspondents Dinner was a very big, boring bust…the so-called comedian really “bombed.” @greggutfeld should host next year! @PeteHegseth

And as Wolf quipped, “I’m here to make jokes. I have no agenda. I’m not trying to get anything accomplished. So, everyone who’s here from Congress: You should feel right at home.”