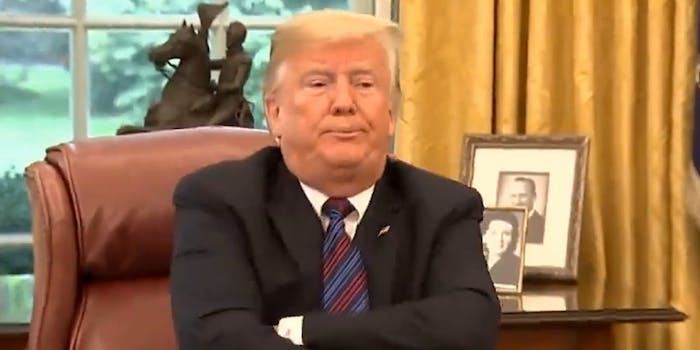 The picture generated a lot of jokes.

President Donald Trump announced the beginnings of a trade deal with Mexico on Monday afternoon during a press event that had its own host of technical difficulties.

However, a photo taken during the event—where the president leaned back in his chair, cross-armed, and refused to answer questions regarding the death of Sen. John McCain (R-Ariz.)—quickly became a meme.

It was the second time over the course of the day the president refused to answer questions about McCain.

During the press event, Trump also fiddled with a phone on his desk attempting to get Mexican President Enrique Pena Nieto on speakerphone for reporters to hear. The trade deal would replace the North American Free Trade Agreement (NAFTA).

The awkward few minutes of the president waiting for an aide to fix the phone was mocked online, but a separate photo has also become one of the countless Trump memes to emerge from his administration.

Some people mocked the president’s apparent desire for two scoops of ice cream, while others joked about his instance on Tuesday that Google was suppressing conservative voices in their search results.

Others, unfortunately, decided to mock the president’s weight.

“How many times do we have to tell you? Eat your broccoli and you can have ONE scoop of ice cream.”

BREAKING: Trump wins Oval office breath-holding contest as Pence keels over after 32 seconds and Chief of Staff John Kelly is stretchered out with heart palpitations. pic.twitter.com/gfLESZ0b82

That look when you lose the National Enquirer and have to quote Lou Dobbs instead. pic.twitter.com/6AJ3ge0LfU

Say what you will about Trump but he’s the first sitting president to hold his breath in the Oval Office until somebody brought him a cheeseburger pic.twitter.com/6GDtAB9GgQ

Who knew one day in the White House would become fodder for so many jokes online?