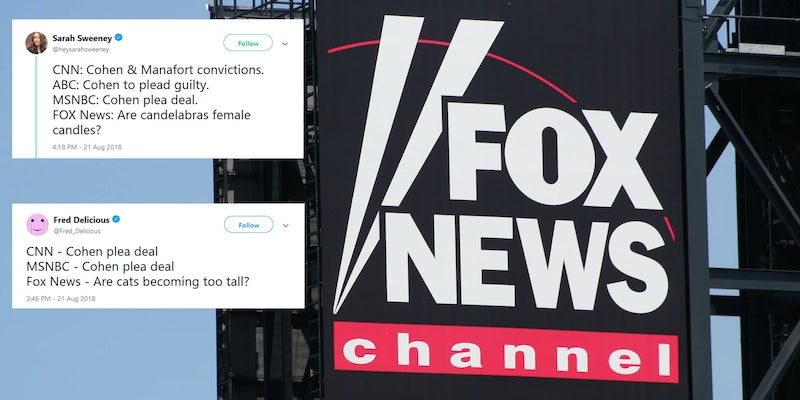 On Tuesday, President Donald Trump‘s former campaign chairman Paul Manafort and former personal lawyer Michael Cohen were both at the conclusion of their respective lengthy legal battles—and major cable news networks were breathlessly covering the cases as news came in.

Manafort was found guilty on eight counts of felony tax fraud, failing to declare a foreign bank account, and bank fraud. A judge declared a mistrial for 10 other counts levied against him.

While outlets like CNN, MSNBC, ABC and others covered the trials, people on the internet poked fun at Fox News‘s coverage of the events (or lack thereof).

While some jokes were critiques of Fox’s coverage, a meme popped up that’s essentially a running list of outlets covering the Manafort and Cohen news, ending with Fox News “covering” a completely unrelated (or bizarre) subject.

Fox has, in the past, talked about anything but the legal trouble of Trump associates.

To be fair, Fox News’s website had several stories dedicated to the Manafort and Cohen news on Tuesday night and Wednesday morning, with both trials taking up most of the real estate at the top of their politics section. And no stories about panda sex.