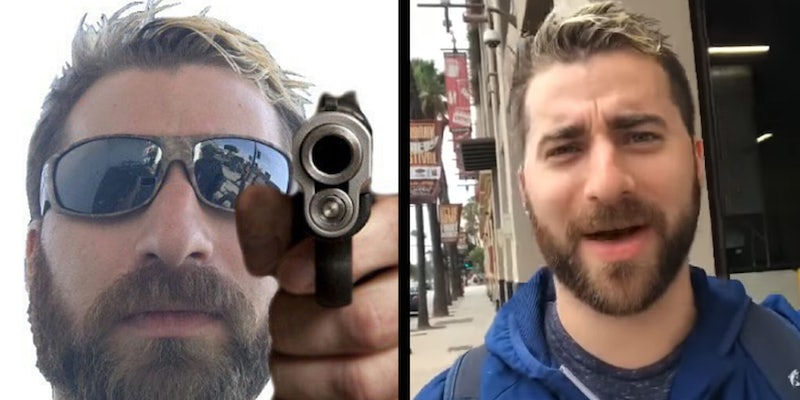 The far-right internet troll Baked Alaska has threatened to sue a news outlet for using a what appears to be a doctored photo of him holding a gun—except he tweeted the same photo himself less than a month ago.

AJ Plus, a news outlet run by Al Jazeera Media Network, published a video earlier this summer asking “why white supremacists love Bashar al-Assad?” that featured a picture of Baked Alaska, whose real name is Tim Gionet, holding a gun.

Baked Alaska attended the Charlottesville, Virginia, white supremacy rally that ultimately ended in violence and the death of one woman. Before that, he has associated with the “alt-right,” a loose-knit group known for championing bigoted, pro-white views.

“Wow @ajplus photoshopped a picture of me holding a gun & calls me white supremacist, putting me in danger! BIG LAWSUIT coming!,” Gionet tweeted.

The only problem with his threat of a lawsuit? Baked Alaska tweeted out the photo on Aug. 8 with the caption “get in bitch we are saving the world.” It was not retweeted, so it appears Gionet uploaded the photo himself.

Gizmodo, which first reported the discrepancy in Baked Alaska’s tweets, points out that it is unclear what Gionet could actually sue AJ Plus over.

While some of his supporters suggested defamation would be grounds for a lawsuit, it’s unclear whether AJ Plus would be found guilty of defamation for calling him a white supremacist, given that he has tweeted several things that are associated with the hateful ideology and attended the rally in Charlottesville that was explicitly intended to promote white nationalism.