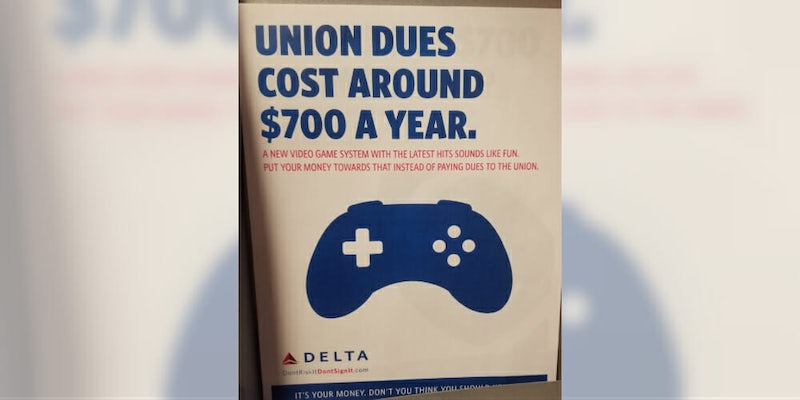 Twitter is dragging Delta for its strange anti-union propaganda posters

Delta is suggesting its workers buy video games instead of paying union dues.

You can buy video games and have some fun, or pay for union dues and protect your rights as a worker. Those are apparently the only two choices you have, according to a Delta Air Lines anti-union propaganda poster.

“Union dues cost around $700 a year,” the poster reads. “A new video game system with the latest hits sounds like fun. Put your money towards that instead of paying dues to the union.”

Delta’s lousy attempt at trying to get its workers to stop unionizing went viral after Common Dreams writer Eoin Higgins tweeted a photo of it Thursday.

In less than 24 hours, it’s racked up more than 2o,000 retweets and nearly 80,000 likes. Many are pointing out one obvious oversight: the most popular video game consoles on the market aren’t even $700.

The poster is directed at Delta’s ramp workers, who are preparing to unionize in order to dispute limits on part-time hours and bargain for better health insurance.

Delta’s anti-union efforts aren’t only limited to posters. The company has an entire website dubbed “Don’t Risk It. Don’t Sign it.” The website is preaching the potential perils of organized labor unions.

People on Twitter are obviously dragging Delta’s latest attempt to encourage its workers not to unionize.

After not paying Delta union dues, I go home and relax on my throne pic.twitter.com/bcQiEFe2ic

I sent that absolute garbage Delta anti union poster to my union steward and she just texted me this in reply 😂😂😂 pic.twitter.com/RYkBSin26N

And apparently, @Delta doesn’t want to either.
https://t.co/zxYpk0ZWcV

Wow. Delta would give you plenty of time to play video games when they fire you for no good reason because you're an At Will employee. But a union contract protects your paycheck from arbitrary terminations. @AFLCIO @EoinHiggins_ pic.twitter.com/bM9cTtWn0o

Many are also pointing out other anti-union measures taken by Delta, including two union-busting Android apps to go along with its website. The apps, in the Google Play Store, are being flooded with one-star reviews–along with commenters citing the company’s anti-union stance.

Sen. Bernie Sanders (I-Vt.) even weighed in on the scandal by tweeting at Delta to “Stop trying to undercut workers’ right to form a union and negotiate for better wages.” He also pointed out that some ramp workers make $9 per hour whereas the company’s CEO received $22 million in 2017.

Delta told employees to buy video games instead of forming a union. What a disgrace.

Delta's CEO made nearly $22 million in 2017 while paying ramp agents as little as $9/hour.

I say to Delta: Stop trying to undercut workers' right to form a union and negotiate for better wages. https://t.co/8fx30jIfJf

The buck doesn’t stop with just one bad Delta poster. A second poster, which was also shared, suggests its workers buy drinks with their football buddies rather than pay for union dues.

The Daily Dot has reached out to Delta Air Lines.