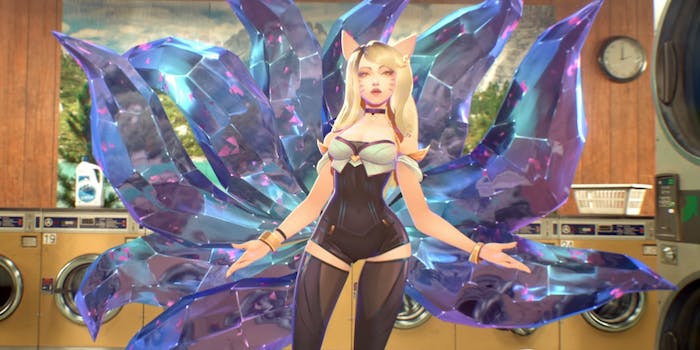 They're protesting the studio’s legal actions and alleged sexism.

Employees at League of Legends developer Riot Games participated in a walkout at their Los Angeles-based office on Monday. The protest came in the wake of reports of a longstanding history of sexual harassment allegations, plus attempts by company management to obligate employees to settle disputes via the controversial practice of forced arbitration.

In April 2019, Riot Games filed to block the current employees’ lawsuits from being brought to a court and jury, claiming the women had agreed to arbitration clauses. Arbitration can work similarly to a court hearing in that there is ostensibly the chance to present evidence and witness testimony, but the final decision is ultimately left to the arbiter. The process is commonly regarded as a way for companies to shield themselves from legal action, restricts some of the information-gathering abilities of employee (although Riot says it allows fulsome discovery), and typically cannot be appealed.

Riot Games detailed its process in a blog post, noting that the company covers all arbitration costs, requires that both parties must agree on an arbiter, and does not cap the amount in damages awarded, among other points.

News of Riot filing to block the lawsuits stirred up anger throughout the company’s workforce and spurred talk of the walkout. The following day, Riot announced it would allow future employees to opt out of forced arbitration for harassment cases and was considering allowing current employees the same policy.

In a statement to Daily Dot, a Riot representative said that the company is supporting the employee walkout Monday.

“We have asked all managers to make every accommodation to allow Rioters to participate during the 2-4pm window, including freeing up meeting times,” the representative said. “We respect Rioters who choose to walkout today and will not tolerate retaliation of any kind as a result of participating (or not).”

On Twitter, support for the walkout extended from numerous Riot employees all the way to representatives of the AFL-CIO, the largest federation of unions in the U.S.

“Proudly in solidarity with everyone joining together for today’s #RiotWalkout,” AFL-CIO secretary-treasurer Liz Shuler tweeted.

Proudly in solidarity with everyone joining together for today's #RiotWalkout.

Never forget: you're not alone. You deserve a safe workplace, and you have countless brothers and sisters ready to fight alongside you. #1u

“It should not be legal to force workers into arbitration when they suffer sexual harassment—or any other discrimination, really,” said Riot Games editor Laura Michet.

Multiple other employees tweeted to announce their participation with #RiotWalkout.

I am participating in the #riotwalkout today. It should not be legal to force workers into arbitration when they suffer sexual harassment– or any other discrimination, really. It's already not legal in several states. I'd like my company to be on the cutting edge of this issue!!

Getting my day lined up for the #riotwalkout – I am part of this because I believe in Riot and think we can do better! pic.twitter.com/eT4wmQECm9

Today is the #RiotWalkout. Time to show leadership we are serious. Sexual harassment and protecting abusers will not be tolerated. We deserve to work at a place where we feel safe and welcomed.

I will be participating in the #riotwalkout today to protest against leadership's use of forced arbitration in cases of discrimination and sexual harassment.

I love Riot and am proud of many of the steps taken so far to improve our culture, but it's not yet enough.

i will be speaking at the #RiotWalkout today to share messages of support from players and workers from other companies. I am so proud to be at Riot and things are getting better, but we have a long way to go to make it truly inclusice. Let’s make Riot a dream job for ANYONE pic.twitter.com/bWCflsqMJb

I’m participating in the #riotwalkout today, because arbitration should be optional, not forced.

Clearly I love this place. Its in my user name on most platforms. Its part of who I am. That being said, the place I love is BETTER than this. Riot and the people who work here are better than these stupid policies. I want it to get better, and show my support #riotwalkout

In the week leading up to #RiotWalkout I recall hearing a comment about not wanting to create an 'us vs. them' mentality around discrimination and harassment issues. The thing is, I WANT it to feel like it's us vs. them… I just want the dynamic to be more like US (company

Noted indie developer and industry advocate Rami Ismail also chimed in, saying, “I applaud the #RiotWalkout today, & those taking risks to gain a collective seat at the table that defines their workplace.”

History being written & the future being changed. I applaud the #riotwalkout today, & those taking risks to gain a collective seat at the table that defines their workplace. It shows with emphasis that our industry can not go back to ignoring the workers. https://t.co/eNNDgKWgWt

Game Workers Unite, arguably the largest pro-worker advocacy group focused on the video game development community, issued a statement of support in favor of Riot employees participating in the walkout.

“In the years ahead, as the movement to improve the lives of workers in the game industry continues to grow, we will all look back on the day Rioters (a fitting name given the daily courage and determination you display) walked out as the first strong and confident step towards ending our industry’s culture of harassment and worker exploitation,” the statement said.

Current estimates as of this writing put the Riot walkout’s attendance at 150 individuals, although according to Variety, the hope is that number could reach 500. Riot Games employees more than 2,500 people.

This story is developing and will be updated as new information becomes available.