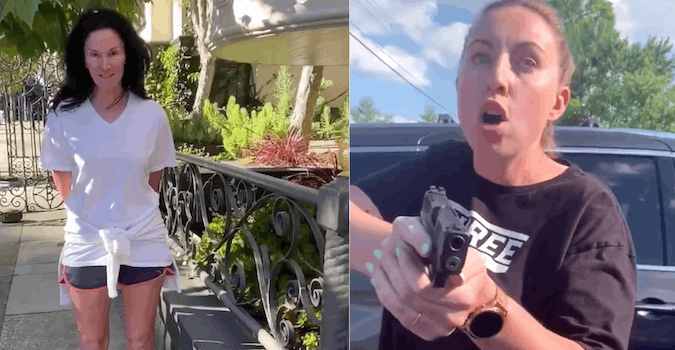 Activists say ‘Karen’ nickname trivializes racists, call for the use of ‘white supremacist’ instead

'Karen was never supposed to be anything more than white women demanding a manager.'

With a slew of viral videos exposing white women weaponizing their entitlement against Black people, “Karen” has become a household name.

Whether’s it’s at a grocery store demanding she get her way or patronizingly questioning people of color about their presence in affluent areas, the Karen moniker symbolizes the power many white women exercise to exert dominance over minorities.

While recent videos have exposed a whole range of these women, from the woman who called the police on her Black neighbor to women spitting and coughing on others to protest mask rules, some activists are worried this is trivializing the racism and white supremacy these women exhibit.

The conversation surrounding the moniker really took off after a video captured a white woman pointing a gun at a Black family in Auburn Hills, Michigan.

Twitter user Makay Smith was among many others who have shared the video. And she, like many others, referred to the white woman as yet another Karen.

Many began responding that the violence—or at least the threat of violence—is nullified with a term as lighthearted as “Karen.” The white woman is seen holding a Black family at gunpoint after one member demanded an apology from the white woman for bumping into her.

This, many said, is not the equivalent of the Karen-esque behavior of “calling a manager,” especially given how bad it could’ve ended in for the Black family.

People online called for the euphemism to be put to rest.

“When you use the word Karen in replace of the persons name you are desensitizing people to the severity of the situation, and protecting this Woman’s identity when she should be held accountable for her dangerous actions,” one Twitter user wrote.

Another user, who said the moniker belittles “the fact that they get black people KILLED,” called the Michigan woman an attempted murderer.

“The ‘Karen’ thing was cute at first but it’s actually harmful in that it others, or distances, white women who violently uphold white supremacy from the ‘default’ state of white womanhood to a scapegoated periphery that allows most white women to feel free of culpability,” Twitter user @AposThriceGreat wrote.

Others pointed out that “Karen” was started as a “white woman demanding a manager” and turned into a “euphemism for white supremacist.”

Many said it’s too “kind” and “soft” to brand a woman, exhibiting this type of behavior, as a mere “Karen.” They want these women to be labeled straight-up white supremacists instead.

“You know the whole Karen thing has gotten out of hand when a white woman pulls a gun on black protesters and is called a ‘Karen’ instead of idk ‘terrorist’ or ‘white supremacist,'” one person wrote in response to the couple who pointed guns at protesters for walking too close to their mansion.

The idea of a “Karen” is usually light-hearted and used as a mode of humor. While it can be funny in situations where their actions don’t result in violence, using such a light reference dangerous—or potentially dangerous—situations only adds to the danger.