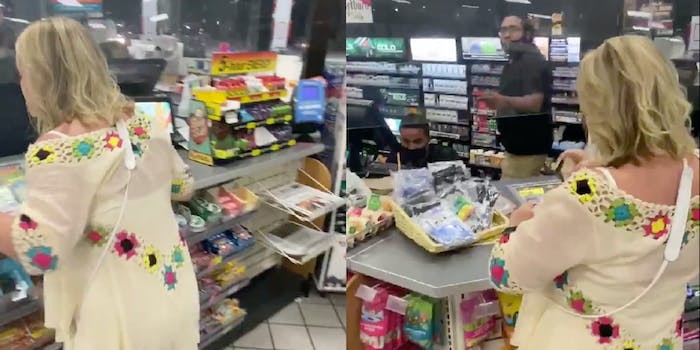 'This is ridiculous! There's no law that says you have to wear a mask!'

A woman was filmed spitting at a gas station employee after being told that she needed to wear a mask.

Footage of the woman, which shows her arguing with a cashier, made the rounds on social media over the weekend.

The woman can be seen spitting in the direction of the employee as the two argue over the store’s face mask policy.

“This is ridiculous,” the woman says while leaving the store. “There’s no law that says you have to wear a mask.”

The incident is just one of many in which a “Karen,” a slang term for an unnecessarily antagonistic white woman, has been witnessed throwing a fit related to the pandemic.

Just this week a woman was filmed going on a political tirade inside a Trader Joe’s after similarly being asked to wear a mask.

“You’re fucking Democratic pigs!” the woman yelled. “All of you.”

Another Karen spotted in Florida this week even purposely coughed on a woman who had been filming her harass workers at a Pier 1 Imports.

The victim, Heather Sprague, is immunocompromised as a result of a brain tumor.

“I think I’ll get really close to you and cough on you then, how’s that?” the Karen says. “Asshole.”

But Karen isn’t always the one in front of the camera.

A Karen also recently attempted to shame a Starbucks employee who refused her service for not wearing a mask. After posting footage of the employee on Facebook, a monumental backlash ensued. The internet responded by raising more than $78,000 for the harassed employee.