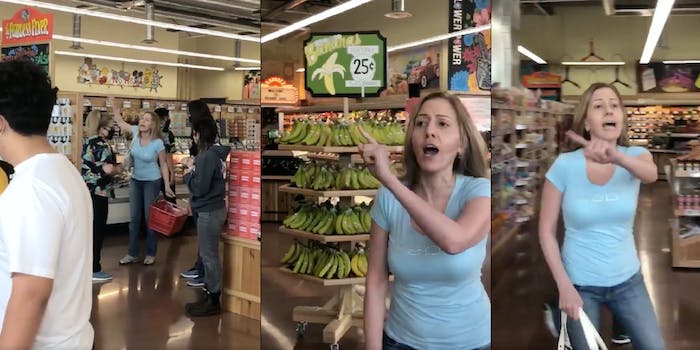 She was eventually booted from the store.

A woman at a Trader Joe’s went on a tirade after she was told she had to wear a face mask in its store.

According to TMZ, the woman arrived at the San Fernando Valley store wearing a face covering. At some point while shopping, however, the mask disappeared.

A store manager told TMZ the woman claimed she had a breathing problem, which is why she removed her face covering. But her alleged illness didn’t prevent her from screaming at employees and other customers.

Once people approached the woman and told her to cover her face, she refused. Then things got political.

“This is day one,” a narrator says. “This is opening day of Trader Joe’s in North Hollywood.”

“You’re fucking Democratic pigs!” the woman yells, while angrily throwing her shopping cart to the ground. “All of you.”

In another video, the woman says, “I have a breathing problem. My doctor would not let me wear a mask. So anyone harassing me to wear a mask, you guys are violating federal law. Get that on camera.”

TMZ says the woman was ordered to leave the store—and did.

Many states—including California—have ordered people to wear masks in most indoor spaces. To be clear, there are some exceptions for people under a certain age, or if a person’s medical condition affects their mask use, according to JD Supra.

If customers can’t wear a mask due to a disability, stores are supposed to find alternative methods of service so customers can get what they need, while keeping others safe.

Trader Joe’s has not publicly responded to the incident.