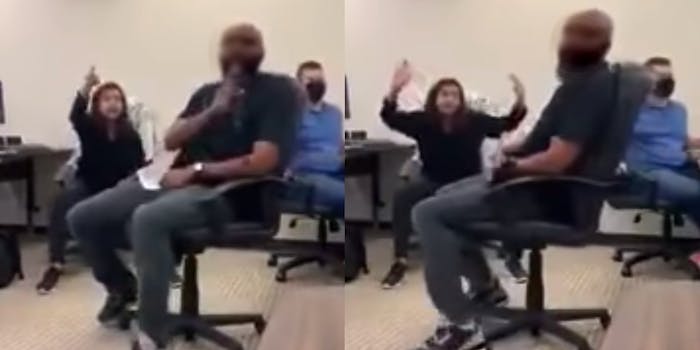 Black With No Chaser

A viral video shows a woman rapping and yelling the N-word at a Black man at least 15 times in a workplace.

Reports claim the incident occurred at the office of Gibson Arnold & Associates in Houston, Texas. The video was shared on different platforms, such as Twitter by the account Black With No Chaser, and has been viewed more hundreds of thousands of times.

According to TMZ, the incident took place on Monday after the woman was fired.

The over one-minute-long video starts with the woman yelling, “Think as [N-word]” at a Black man, identified as Kenton Oates, who is in a leadership position at the company. Oates is sitting on a swivel chair and remains calm throughout the video.

“You better call the police cause I said N-word,” she continues.

She then repeats the N-word at least 15 times, as Oates keeps swiveling on his chair, looking away from the woman at times.

“Let’s make some rap for the [N-word]” she says, trying to rap and making obscure gestures.

“I wanna hear you rap motherfucker,” she says while clapping her hands.

The only other person seen in the background of the video is a white man. Both men are wearing masks, but the woman does not have one on.

Someone in the background is heard saying, “Can we concentrate on our tasks? It’s really important that we do this.”

The man in the background can be seen recording the incident on his phone.

“Yeah. It’s really important that you record it, so you get some publicity,” the woman says.

“Nah. Don’t worry. This is all for attention. I’m not trying to post this anywhere,” says another man in the room, who is out of the camera’s view.

“I don’t give a damn what you do,” says the woman.

“I don’t give a damn what you do either,” he says.

She cuts in, “You need to do your eyebrows.”

“I’ve been trying to do my work,” one of the men says, “and this is a misunderstanding on your part.”

“I’m sorry that you need to do your eyebrows, and it’s a misunderstanding on your part,” she responds.

“You can’t attack my looks,” he says.

The video then ends.

It did not name the woman, only saying she was on a “short term assignment” with the company. She was “immediately terminated” and escorted out of the office after her racist rant.

The statement also clarified that two women, full-time employee Elaina McMillan and former employee Michelle Bresser, were initially falsely “targeted” after being mistakenly identified as the woman in question.