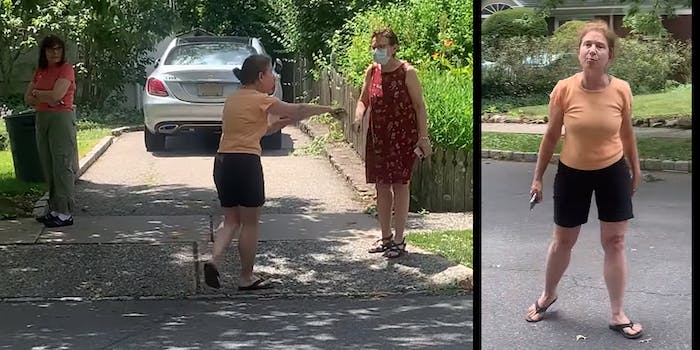 Montclair, New Jersey resident Fareed Nassor Hyatt shared a video on Monday of a standoff with his neighbor, referred to only as Susan. Hyatt, who is Black, alleged that Susan, who is white, came onto their property several times in the span of 30 minutes to ask if they had the proper permit to install a stone patio in their backyard. When Hyatt made it clear that they didn’t need a permit for a patio of this size and told Susan to leave their property, she called the police and claimed she was assaulted.

Hyatt’s video has been viewed nearly 500,000 times in two days on Facebook. In a lengthy caption, Wyatt dubbed Susan “Permit Karen” and called her “white entitlement and Black hate embodied.”

“When challenged about her flawed legal conclusions, assumption of right, her lack of agency over our home and our eventual demand that she leave our property immediately, Susan decided to call the police and make a false report of assault,” Hyatt wrote. “She invoked centuries of brutality in her call to the police and sought to put her black neighbors back in their place.”

Unbeknownst to Permit Karen, her efforts to harass and intimidate her neighbors would be met with opposition from their other white neighbors, who refuted her claims that Hyatt assaulted her.

“In this climate right now, you’re especially not supporting members of our community,” one woman told Permit Karen, who alleged that Hyatt “pushed me 10 feet.”

“Sounds like he didn’t do that,” the woman responded.

“No, I watched him, he didn’t,” another neighbor confirmed.

Permit Karen then walked toward another neighbor on the opposite side of the street, holding her arm out and trying to provide proof that Hyatt pushed her. But Permit Karen, who was not wearing a face mask, earned no sympathy from her masked neighbor.

“Don’t come on me without a mask,” the woman said as she shooed Permit Karen away.

Permit Karen walked back to the center of the road and asked Hyatt to stop filming. He refused.

“This is for the people, so they can see even in Montclair what we are living with,” Hyatt’s wife, Norrinda, said. “For two years, Susan from Marion Road has been harassing us.”

Hyatt praised his neighbors, who “refused to simply go along with [Permit Karen’s] racist efforts” and called their defense “antiracist ideology at work.” Permit Karen did not apologize for her behavior.

“To her Black Lives Don’t Matter when up against her presumed inalienable rights of whiteness,” Hyatt wrote. “Her type, the racist, must be rejected and ostracized like she was today by Norrinda and I, but equally important, by our white neighbors here in Montclair and our white and non-white allies worldwide.”

On Tuesday, protesters briefly mobilized outside Permit Karen’s house, carrying signs and chanting, “Hey hey, ho ho, your racism has got to go.” According to Twitter user @scoop201, Permit Karen called the police on the protesters and accused them of throwing a brick, though the protest appears to have remained peaceful.

Heavy reports that Permit Karen’s phone number has been disconnected.