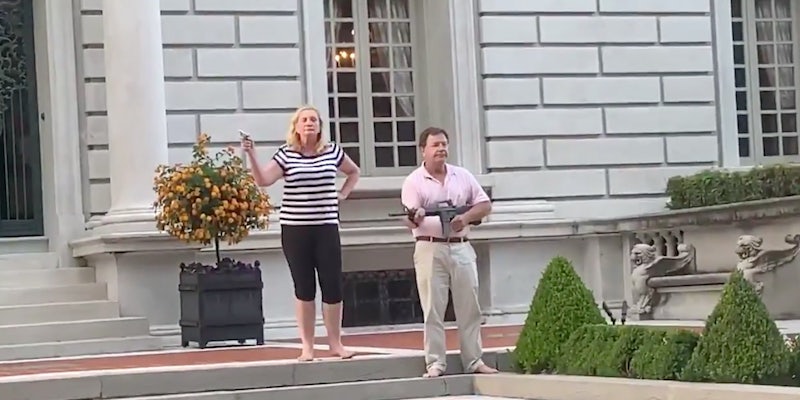 People called it the 'Mr. and Mrs. Smith' remake no one wanted.

A video of a St. Louis couple pointing guns at protesters on Sunday is going viral on Twitter.

The video shows protesters peacefully walking past their house on what appears to be a street in a gated community. That’s when the married couple comes out of their home holding guns. The man points a semi-automatic rifle as the woman holds a handgun.

The protesters were on their way to the St. Louis Mayor Lyda Krewson‘s house to demand that she resign after giving out the names and addresses of people advocating for defunding the police.

In the video, a protester urges people to continue to walk past the couple and to not stop to argue. The couple has been identified as personal injury lawyers Mark and Patricia McCloskey.

People are memeing the video for a number of reasons. Some people are poking fun at the fact that at several points in the video the couple accidentally point the guns at each other. Others get a kick out of them being barefoot.

A subgenre of the memes was focused on the number of movies that could be based on the video, causing “Ken and Karen” and “Mr. and Mrs. Smith” to trend on Twitter.

Social media users give white people the names “Ken and Karen” when they are caught acting privileged or racist against people of color. Someone created a “Ken and Karen” meme out of the couple using a screenshot from the video. In the picture, the gun-toting couple looks like a movie cover.

Others said the video looks like a bad remake of Mr. and Mrs. Smith, a 2005 action romcom with Angelina Jolie and Brad Pitt.

The video of the couple outside of their homes is also causing the word “AR-15” to trend on Twitter. Conservatives are saying the video is an example of why “you need AR-15 in America.” Left-leaning social media users are saying it’s an example of hypocrisy, adding that if it were a Black family pointing a gun at peaceful white protesters the response would have been different.