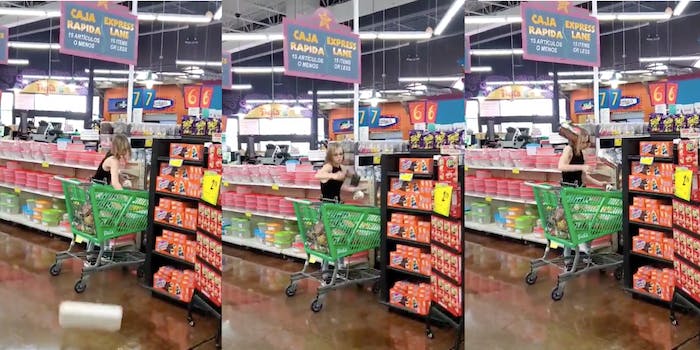 The woman had a mask in her hand.

A viral video shows a woman throwing her groceries onto the ground at a supermarket in Dallas, Texas because she was told to wear a mask.

A Twitter user who posted the video said the manager asked the woman to wear a mask in the store. She responded by throwing nearly all of her groceries in her cart onto the floor.

“Over a motherf*cking mask….It’s f*cking dumb,” the woman says in the video.

The woman then appears to storm out of the store. TMZ and the Sun report that the woman entered the Fiesta Market with a mask. The viral video also appears to show the woman with a mask in her hand.

Some Twitter users quickly labeled the grocery store breakdown as the latest “Karen” episode. Social media users call white women Karens when they act entitled, privileged, or racist. One viral tweet of the video called her a “lovely young Karen.”

Others thought the video was staged for social media, saying it didn’t add up that she had a mask in her hand and didn’t have a single breakable item.

Whether or not the woman staged the meltdown for attention, social media users said it still reeked of entitlement, noting that employees would have to pick up the groceries.

“She’s literally holding a mask in her hand,” Twitter user @Fly_Sistah wrote. “Instead of putting it on she instead decides to throw groceries on the ground for staff to clean up.”

Plus, the rant perpetuated the conspiracy theory that masks don’t help slow the spread of the coronavirus.

The Centers for Disease Control and Prevention recommends that people wear a mask in public places to help control the spread of the coronavirus. The disease is spread through respiratory droplets that people can be exposed to when in close proximity with someone who speaks, coughs, or sneezes.

Texas has a high number of coronavirus cases and began reversing some of its previous “reopening” regulations on Friday. Bars are now closed again statewide and restaurants must function at 50% capacity or less.