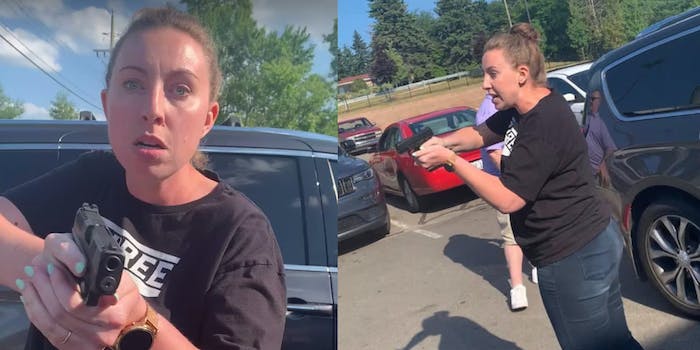 'I’ve never felt so helpless in my life. I’m so shaken up.'

A white woman held a Black family at gunpoint in a video that went viral overnight.

Following an argument near Auburn Hills, Michigan on Wednesday, an unidentified white woman exited her car with a pistol. A video posted to Facebook by the person behind the camera, Takelia Hill, shows the woman pointing a gun at the family for an extended period of time as they argue.

According to news reports from the Detroit News, Hill’s daughter was leaving a Chipotle when the white woman bumped into her. When the daughter asked for an apology, the woman began to yell at her. Hill’s daughter began to fear for her safety and called over her mom.

Hill and the woman argued into the parking lot. Then, a white man got out of the woman’s car and began yelling and cursing at Hill’s family. The couple then got into their car to leave, but as they backed up, the car neared dangerously close to one of Hill’s daughters, according to bystanders.

Hill hit the back window to alert the driver to her daughter’s presence and soon found herself at gunpoint. The woman appears to be in Hill’s face with the gun.

“You f*cking jumped behind my car,” the white woman claims in the brief clip. Hill immediately refutes the claim, which appears to enrage the gun-toting woman. When Hill takes a step forward, the woman—who is still holding Hill at gunpoint—utterly loses her cool.

“Get the f*ck back,” she screams, backing away from Hill.

Other pedestrians can be seen in the background of the clip, clearly fearful for Hill and her children. Once Hill backed up a few paces, while still staring down the barrel of a gun, the white woman finally lowers her weapon as frantic screams can be heard in the background. The video shows the woman with the gun returning to the passenger’s side of her car, where the man appears to be on the phone. He seems to be speaking with the police. His words are difficult to make out, but he clearly claims that “this lady just hit our car.”

Moments later, the white couple drives away. Hill makes sure to get a look at their license plate on the way out, and the video ends on a shot of their retreating vehicle.

A photo posted to Hill’s Facebook page shows the woman with what appears to be an officer behind her. It looks as though she is in the process of getting cuffed.

Local police confirmed that the woman and the man were charged with felonious assault and that both of their guns were confiscated.

“I’ve never in my life had a gun pulled out on me let alone two and while I had my three daughters,” Hill wrote in the Facebook post. “I’ve never felt so helpless in my life I’m so shaken up.”

Commenters on the post urged Hill to press charges. It is unclear if she intends to do so. The video, once made public, quickly shot to virality. The original Facebook post has upwards of 1,000 likes and 2,500 shares. A Twitter post from a woman claiming to be Hill’s sister has racked up 88,000 retweets and hundreds of thousands of likes.

Update 7:49am CT, July 3: The article was updated to include a statement from the police.