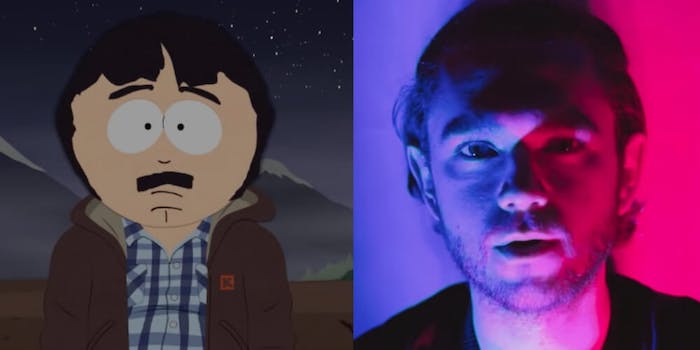 The DJ had to clarify that he was not joking.

Zedd has found himself in the middle of the China vs. South Park feud.

The DJ says he has been “permanently banned” from China after liking a tweet about the Comedy Central show.

“I just got permanently banned from China because I liked a @southpark tweet,” Zedd shared on Instagram.

‪I just got permanently banned from China because I liked a @southpark tweet.‬

“Just to clarify, this is NOT a joke,” he wrote. “The government informed our promoters that if they don’t cancel my scheduled shows in China they would pull their cultural permits.”

The news follows reports that China banned South Park after the show aired an episode that poked fun at the country’s censorship laws. The episode, titled “Band in China,” not only criticized the Chinese Community Party and its censorship policies but also criticized the many American entities that adhere to them.

Shortly after it aired, the episode was erased from multiple media platforms in China, and the show was subsequently banned from the county. Regarding the banning, South Park creators Trey Parker and Matt Stone released a mock apology, saying, “We too love money more than we love freedom and democracy.”

Chinese censorship laws have been in the news lately, most recently after Houston Rockets general manager Daryl Morey tweeted in support of the Hong Kong protests. Even after Morey deleted the tweet, many media outlets in China stated they would no longer air Rockets or NBA games, while many online shops pulled Rockets merchandise from their stores.

Morey and the NBA promptly apologized for the tweets. The NBA called the controversy “regrettable” in an initial statement, with NBA commissioner Adam Silver stating, “Values of equality, respect, and freedom of expression have long defined the NBA–and will continue to do so.”