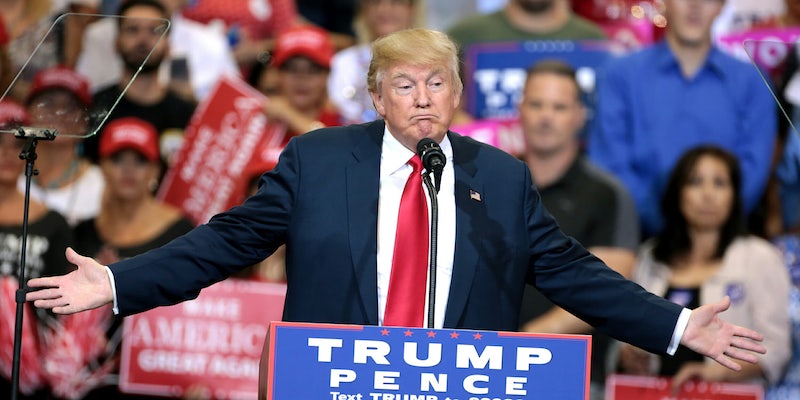 Dictionary announces its Word of the Year: ‘Complicit’

It's a politically perfect fit for 2017.

If you’ve been paying attention to the American news cycle over the past 12 months, then you’ve probably heard the word “complicit” pop up a lot. Usually, it’s used against the Trump administration, claiming key members in and around the White House are involved, even indirectly, in the executive orders and policy changes that have targeted minorities and sent shockwaves throughout the country, like the sweeping “Muslim travel ban.” So it should come as no surprise that Dictionary.com chose “complicit” as 2017’s Word of the Year.

In a press release obtained by the Daily Dot, Dictionary.com defined “complicit” as “choosing to be involved in an illegal or questionable act, especially with others.” The site called the term “indicative of larger trends” throughout the year, ranging from political scandals within the Trump administration to sexual misconduct allegations across the American entertainment industry.

“Lookups for the word complicit increased by nearly 300 percent in searches in 2017 as compared to 2016,” Dictionary.com CEO Liz McMillan said in an official statement. “We continue to see a direct correlation between trending word lookups and current events, and we find it encouraging that our users are dedicated to understanding the language and words that pop up in the biggest news stories of the year.”

Dictionary.com pointed to several major news stories increasing searches for “complicit” online. For one, there’s the mounting Russia investigation led by Special Counsel Robert Mueller, tracking Trump’s relationship with the Russian government during the 2016 election. There’s also the U.S.’s ongoing impact on global warming, with Trump pulling out of the Paris Climate Accord “furthering concern that human complicity is hastening our planet’s demise,” the site explained.

Dictionary.com particularly pointed to sexual assault allegations against Hollywood producer Harvey Weinstein, Republican Senate candidate Roy Moore, and Kevin Spacey, which fueled searches for the term as many wondered who was complicit in helping sexual abusers “cover their tracks and shut down any victims who tried to come forward.”

“User lookups on Dictionary.com throughout the year have been indicative of larger cultural issues and debates that have come to a head in 2017,” Dictionary.com lexicographer Jane Solomon said in a statement. “While a lot of the lookup trends we saw are sobering, they reflect the difficult yet important topics currently being discussed.”

But “complicit” wasn’t the only word that internet denizens were searching up in 2017. Dictionary.com also pointed to several other terms, such as “intersex,” which trended in January after model Hanne Gaby Odiele opened up about her intersex identity as a person born without reproductive anatomy that’s distinctively male or female. And then there was the term “horologist,” aka a maker of clocks, which popped up during the podcast S-Town. And even the word “tarnation” trended during early 2017, as users stumbled across the “wot in tarnation” meme in the wild.

2017 has been a difficult year, but at least the dictionary has been there to help the internet figure out who has been complicit in this mess.