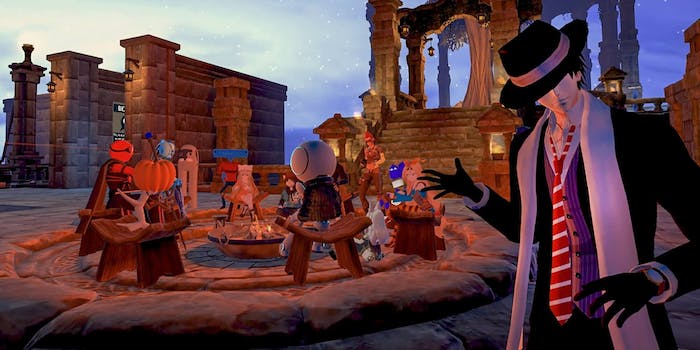 These are the best multiplayer games to play while social distancing

From Dota 2 to Stardew Valley, these games will let you hang with friends.

The world is preparing for a medical crisis as coronavirus (also known as COVID-19) infections increase globally. Americans in major cities like Boston, New York, and Seattle are already taking preventative measures through social distancing. The term refers to individuals isolating themselves from public life in order to prevent the spread of disease.

Of course, humans are social creatures, and disrupting daily contact can be stifling. Services like Discord have helped by increasing the capacity for phone and video calls. One of the best ways to deal with the stress of staying home situation is to sit down and play some games. Here are some games new and old you can play with friends while social distancing,

Virtual reality provides one of the few outlets to safely “cheat” social distancing. With a VR headset and controllers, you can hang out with other VRChat players and play games, explore new worlds, or just shoot the breeze. While VRChat is best experienced with advanced VR devices like the Oculus Quest or Valve Index, non-VR players can also try out the experience straight from their computer monitors.

Riot Games’ League of Legends may just be the most famous online multiplayer video game of all time. It’s a champion of the multiplayer online battle arena (MOBA) genre and known for both its steep learning curve and rewarding team gameplay. Players pick from a roster of over 100 champions and work together to complete a key objective, such as destroy an enemy base. While it takes time to get the basics down if you’re new, League of Legends’ large playerbase and competitive nature makes it a fantastic timesink if you’re stuck indoors with little to do.

League of Legends may be the best known MOBA, but the original Dota invented the genre, and its free sequel has perfected it. Teams of five choose from an enormous hero pool and work together to destroy the other team’s base. Dota 2 differs from League thanks to its more complicated mechanics, such as sacrificing (or “denying”) friendly units (“creeps”) to prevent opponents from scoring experience points and gold. Dota has an even higher skill curve than League, and its increased difficulty makes the stakes higher. But while Dota 2 is incredibly unforgiving to newcomers, its challenge also proves its best asset for calling up friends and playing together while home alone.

Once upon a time, Epic Games’ Fortnite: Battle Royale was considered the best battle royale video game thanks to its emphasis on quick building and even quicker shooter reflexes. EA’s Titanfall spin-off Apex Legends has since pushed Fortnite aside and become the dominant title. Teams of three work together to remain the last squad standing in this first-person shooter that combines MOBA-like character roles with gameplay mirroring the original battle royale hit PlayerUnknown’s Battlegrounds. Because Apex is free to play and available on PC, PlayStation 4, and Xbox One, it’s one of the easiest games for friends to get together and hang out.

Berserk Games’ Tabletop Simulator has long been a top recommendation for playing virtual board games with online friends. It’s also a phenomenal way to spend time with loved ones when you’re isolated from each other. Thanks to the Steam Workshop, an extensive number of community mods exist for playing everything from Uno to Dungeons & Dragons in-game. VR users can also use their headsets to further immerse themselves as if they’re really playing together with friends.

Like Super Smash Bros. on the Wii and Wii U, Super Smash Bros. Ultimate lets players join up with friends and duke it out with such iconic characters as Sonic, Kirby, Mario, and Samus. Bear in mind that while Ultimate’s matchmaking system is sophisticated, some users report connection issues during play. A wired connection via an Ethernet cable attached to players’ Nintendo Switch dock is recommended, as well as optimizing network settings.

ConcernedApe’s Harvest Moon spiritual successor Stardew Valley is best known as a relaxing single-player farming experience. But in 2018 and 2019, multiplayer support was rolled out to PC and consoles, respectively. Groups of two to four players can join up online and tend to a farm, each with their own cabin. Players can even marry each other and have a child. Whether for couples looking to hunker down over laptops and hot chocolate, or long-distance Stardew Valley fans planning their farms over Discord, it’s a fantastic game for staying in touch while social distancing.

Like many games on this list, Sid Meier’s Civilization is a noted timesink. It’s also a phenomenal game to play with friends online. Turn-based play in Civilization VI can chew away a night otherwise spent alone as players fight to become the dominant civilization on the planet. Civ VI is easily best enjoyed as a late-night all-nighter, but for those more responsible, the game works just as well as an evening treat before bed—so long as you can pull your friends away from playing just one more turn.

There’s no better way to bond with friends over long-distance than with a massively multiplayer online title, and Final Fantasy XIV is one of the most popular around. Also known as Final Fantasy XIV: A Realm Reborn, players join with friends in this role-playing game to explore a rich world. Gain experience points, play quests together, fight against your friends (or enemies!), and come together as a party for dungeons and raids. While Final Fantasy XIV requires an online subscription to keep playing, newcomers can get started with Square Enix’s free trial.