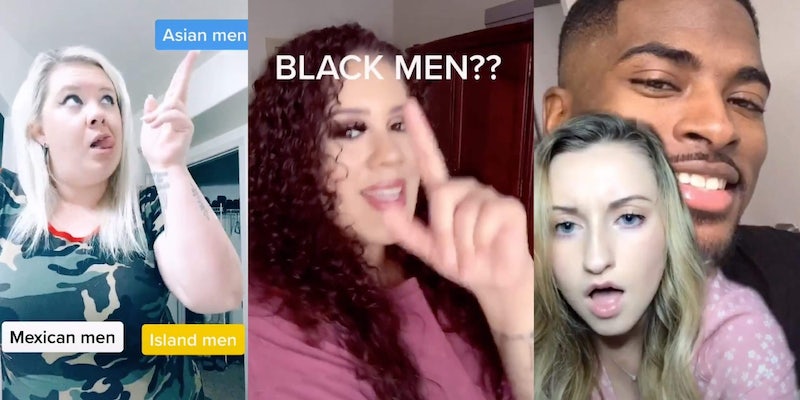 'It's weird and uncomfortable to watch.'

White girls and women are fetishizing Black men in bizarre TikTok videos that include rap songs, comments about physical attributes, and tags like #mytype or #Blackmen.

The Daily Dot reviewed nine videos where white women objectified Black men, including seven on TikTok and two posted by Twitter users calling out the creators.

Most of the videos following the trend have thousands of likes on TikTok.

In a video with almost 4,500 likes, user @ms_k_mc appears makes faces alongside the text “Men I like.” Four options pop up: “White men,” “Asian men,” “Mexican men,” and “Island men.” She uses her fingers to shoot down each of the options before presenting above her the ultimate choice: “Black men” with the heart and fire emojis.

In another video, user @bebegirl0018 says “no” to a running list of ethnicities and races before the option “BLACK MEN??” appears on the screen and she nods in approval. Her video is tagged with #mytype, #blackguys, and #blackmen.

User @halpal__ shared a video with the caption, “WHERE ARE MY DARK CHOCOLATE BOYS” and expressed her preference for “specifically dark chocolate” men.

“Just to clear the air—no, I don’t date white boys,” she says. “I do date mixed boys, I like y’all little caramels okay. Y’all is fine as shit. But if you are chocolate, specifically dark chocolate—baby boy!”

In another video, a user posted the caption, “I fetishize black men what abt it?”

Twitter users called out one woman for fetishizing Black men. A TikTok video shows her saying, “So sweet, wonderful personalities….your kisses and your hugs just hit different … For all my chocolate men out there, who said it was OK to be that fine?”

“Yes my dad is OK with me dating Black guys,” the woman says later in the video.

It’s not clear what prompted the video trend, but people on social media are expressing their issues with the content.

“Stop this trend of fetishizing black men in tiktok,” one Twitter user wrote. “It’s weird and uncomfortable to watch. Just say you like black men and go.”

The fetishization tied up in the #Blackmen TikTok trend is especially problematic given America’s history of white women—and society at large—using Black men as scapegoats for any criminal activity. In the 19th Century, Black men accused of sexually assaulting white women faced the death penalty, but white men accused of the same did not.

The historical problem has resulted in a psychological syndrome called “Blame a Black Man Syndrome,” according to Psychology Today, wherein either an imaginary Black man or an innocent, existing Black man are accused of a crime. According to psychiatry professor Rob Whitley, men who have been falsely accused of crimes can endure psychological damage “similar to that seen in torture survivors.”